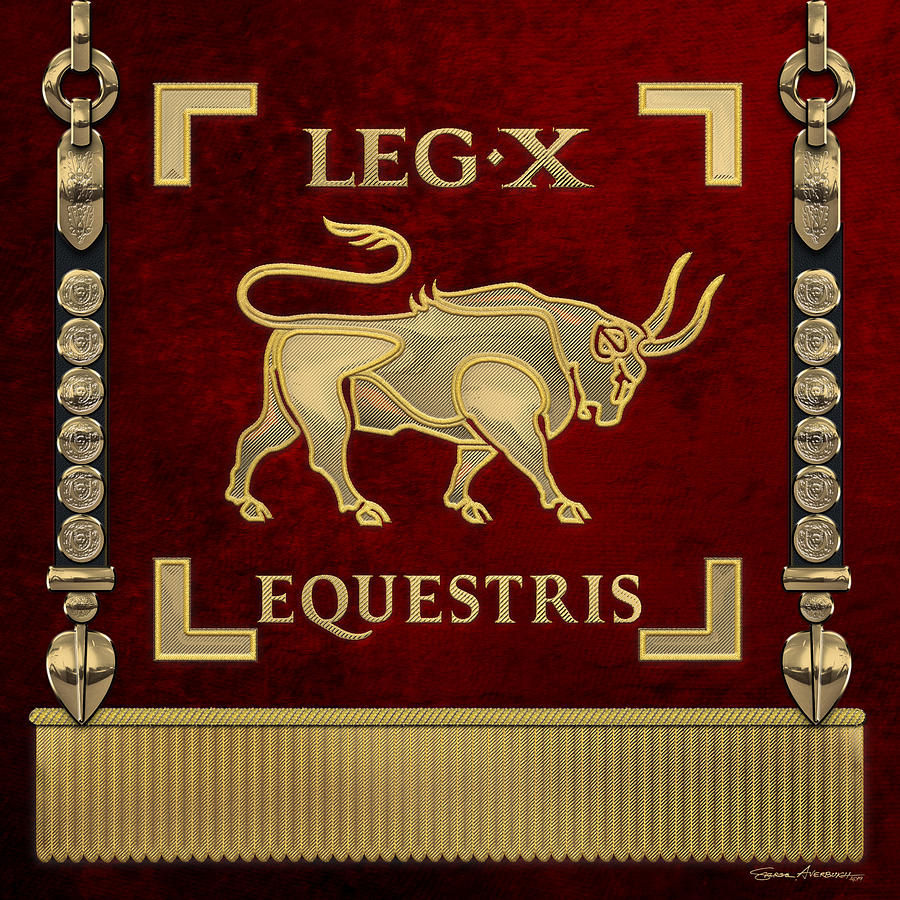 Legio X Equestris (Latin: Tenth Legion "Mounted"), a Roman legion, was levied by Julius Caesar in 61 BC when he was the Governor of Hispania Ulterior. The Tenth was the first legion levied personally by Caesar and was consistently his most trusted. The name Equestris was applied after Caesar mounted legionaries from the Tenth on horses as a ruse in a parley with the German King Ariovistus in 58 BC because he did not trust his Gallic cavalry auxiliaries from the Aedui tribe. Legio X was famous in its day and throughout history, because of its portrayal in Caesar's Commentaries and the prominent role the Tenth played in his Gallic campaigns. Its soldiers were discharged in 45 BC. Its remnants were reconstituted, fought for Mark Antony and Octavian, disbanded, and later merged into X Gemina.
When Gaius Julius Caesar arrived as Governor in the province of Baetica or Hispania Ulterior (modern Andalusia), as it was in 61 BC, he immediately decided to subdue the west and northwest areas (modern day Portugal). He already had two legions based in the province, the 8th and 9th Legions, which had been enlisted by Gnaeus Pompeius Magnus (Pompey the Great) in 65 BC. Caesar needed a third legion for his planned campaign and so he immediately enlisted a new legion, the 10th Legion. Enlisted in March, the legion took as its emblem the bull, an emblem which proved popular with other legions such as Legio V Alaudae (Larks), Legio XI, Legio XII Victrix, and Legio XIII Gemina. The campaign in the summer of 61 BC was very successful and the 10th Legion showed itself to be brave and loyal to Julius Caesar.
During the civil war that followed Caesar's assassination, the Legio X fought for the triumvirs until the final Battle of Philippi. The Tenth later followed Mark Antony in Armenia, during his Parthian campaign. During Antony's civil war, the legion fought for Mark Antony until the defeat in the Battle of Actium, after which the legion moved into Octavian's army. When the legion rebelled under Augustus, it was disbanded, stripped of its Equestris title, and, being populated with soldiers from other legions, renamed X Gemina.