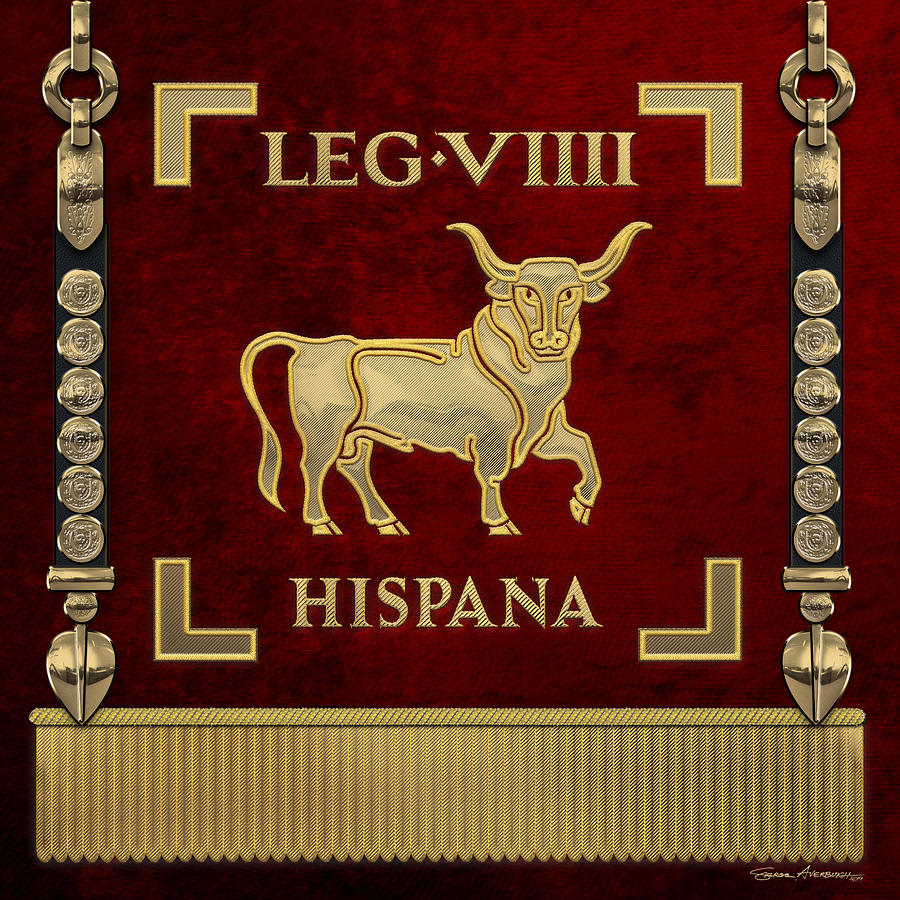 Introducing ‘Rome’ Collection by Serge Averbukh, showcasing new media paintings of various artifacts and symbols of ancient Rome. Here you will find pieces featuring Standard of the Spanish 9th Legion - Vexillum of Legio IX Hispana.
Legio IX Hispana ("9th Legion – Spanish"), also written Legio nona Hispana or Legio VIIII Hispana, was a legion of the Imperial Roman army that existed from the 1st century BC until at least AD 120. The legion fought in various provinces of the late Roman Republic and early Roman Empire. It was stationed in Britain following the Roman invasion in 43 AD. The legion disappears from surviving Roman records after c. AD 120 and there is no extant account of what happened to it.
The unknown fate of the legion has been the subject of considerable research and speculation. One theory (per historian Theodor Mommsen) was that the legion was wiped out in action in northern Britain soon after 108, the date of the latest datable inscription of the Ninth found in Britain, perhaps during a rising of northern tribes against Roman rule. This view was popularized by the 1954 novel The Eagle of the Ninth in which the legion is said to have marched into Caledonia (modern day Scotland), after which it was "never heard of again".
This theory fell out of favor among modern scholars as successive inscriptions of IX Hispana were found in the site of the legionary base at Nijmegen (Netherlands), suggesting the Ninth may have been based there from c. 120, later than the legion's supposed annihilation in Britain. The Nijmegen evidence has led to suggestions that IX Hispana was destroyed in later conflicts of the 2nd century. Suggestions include the Bar Kokhba revolt (132–5) or Marcus Aurelius' war against Parthia (161–6) in Armenia. However, some scholars have ascribed the Nijmegen evidence to a mere detachment of IX Hispana; not the whole legion.
In any event, it is clear that the IX Hispana did not exist during the reign of the emperor Septimius Severus (r. 193–211), as it is not included in two identical but independent lists of the 33 legions existing in this period.