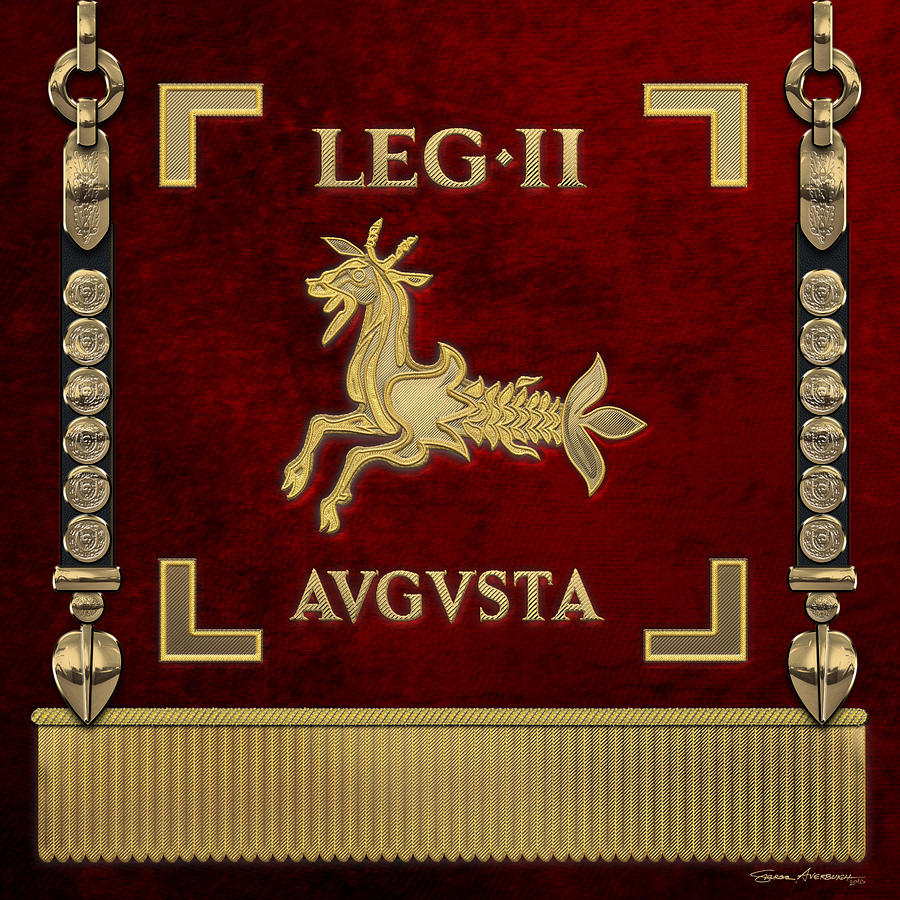 Introducing ‘Rome’ Collection by Serge Averbukh, showcasing new media paintings of various artifacts and symbols of ancient Rome. Here you will find pieces featuring Standard of the Augustus' Second Legion - Vexillum of Legio II Augusta.
A Roman legion (from Latin legio "military levy, conscription", from legere "to choose") was the largest unit of the Roman army, evolving from 3,000 men in the Roman Republic to over 5,200 men in the Roman Empire, consisting of centuries as the basic units. Until the middle of the first century, ten cohorts (about 5,000 men) made up a Roman Legion. This was later changed to nine cohorts of standard size (with six centuries at 80 men each) with the first cohort being of double strength (five double-strength centuries with 160 men each). For most of the Roman Imperial period, the legions formed the Roman army's elite heavy infantry, recruited exclusively from Roman citizens, while the remainder of the army consisted of auxiliaries, who provided additional infantry and the vast majority of the Roman army's cavalry. (Provincials who aspired to citizenship gained it when honourably discharged from the auxiliaries). The Roman army, for most of the Imperial period, consisted mostly of auxiliaries rather than legions. Many of the legions founded before 40 BC were still active until at least the fifth century, notably Legio V Macedonica, which was founded by Augustus in 43 BC and was in Egypt in the seventh century during the Islamic conquest of Egypt.
Legio secunda Augusta ("Augustus' Second Legion") was a legion of the Imperial Roman army that was founded during the late Roman republic. Its emblems were the Capricornus, Pegasus, Mars.
The Legio II, Sabina was a Roman military unit of the late Republican era, which may have been formed by Julius Caesar in the year of the consulate of 48 BC and coincide, in this case, with the Legio II. Enlisted to fight against Pompey, they took part in the subsequent Battle of Munda of 45 BC.
Alternatively it could be the Legio II, formed by the consul, Gaio Vibio Pansa in 43 BC and recruited in Sabina, hence its nickname. It might have participated in the subsequent battle of Philippi of 42 BC on the side of the triumvirate, Octavian and Marc Antony.
After the defeat of the Republicans, Legio II swore allegiance to Octavian and with the same remained until the battle of Actium of 31 BC, after which it seems to have been dissolved in the years between 30 and 14 BC (sent on leave were between 105,000 and 120,000 veterans and some of its soldiers may have been integrated into the new Legio II Augusta.
At the beginning of Augustus' rule, in 25 BC, this legion was relocated in Hispania, to fight in the Cantabrian Wars, which definitively established Roman power in Hispania, and later camped in Hispania Tarraconensis. With the annihilation of Legio XVII, XVIII and XIX in the Battle of the Teutoburg Forest (AD 9), II Augusta moved to Germania, possibly in the area of Moguntiacum. After 17, it was at Argentoratum (modern Strasbourg).
The legion participated in the Roman conquest of Britain in 43. Future emperor Vespasian was the legion's commander at the time, and led the campaign against the Durotriges and Dumnonii tribes. Although it was recorded as suffering a defeat at the hands of the Silures in 52, the II Augusta proved to be one of the best legions, even after its disgrace during the uprising of queen Boudica, when its praefectus castrorum, who was then its acting commander (its legatus and tribunes probably being absent with the governor Suetonius Paulinus), contravened Suetonius' orders to join him and so later committed suicide.
After the defeat of Boudica, the legion was dispersed over several bases; from 66 to around 74 it was stationed at Glevum (modern Gloucester), and then moved to Isca Augusta (modern Caerleon), building a stone fortress that the soldiers occupied until the end of the 3rd century. The legion also had connections with the camp at Alchester in Oxfordshire; stamped tiles record it in the 2nd century at Abonae (Sea Mills, Bristol) on the tidal shore of the Avon.