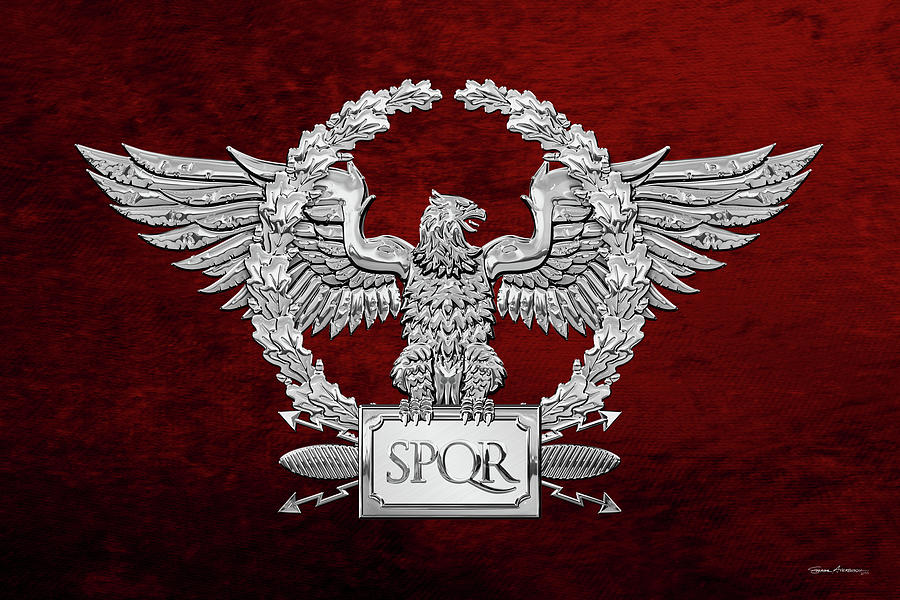 Introducing ‘Treasures of Rome’ Collection by Serge Averbukh, showcasing new media paintings of various artifacts and symbols of ancient Rome. Here you will find pieces featuring Silver Roman Imperial Eagle - SPQR Special Edition over Red Velvet.
The Roman Empire (Latin: Imperium Rōmānum) was the post-Roman Republic period of the ancient Roman civilization, characterized by government headed by emperors and large territorial holdings around the Mediterranean Sea in Europe, Africa and Asia. The city of Rome was the largest city in the world c. 100 BC – c. AD 400, with Constantinople (New Rome) becoming the largest around AD 500, and the Empire's populace grew to an estimated 50 to 90 million inhabitants (roughly 20% of the world's population at the time). The 500-year-old republic which preceded it was severely destabilized in a series of civil wars and political conflict, during which Julius Caesar was appointed as perpetual dictator and then assassinated in 44 BC. Civil wars and executions continued, culminating in the victory of Octavian, Caesar's adopted son, over Mark Antony and Cleopatra at the Battle of Actium in 31 BC and the annexation of Egypt. Octavian's power was then unassailable and in 27 BC the Roman Senate formally granted him overarching power and the new title Augustus, effectively marking the end of the Roman Republic. The imperial period of Rome lasted approximately 1,500 years compared to the 500 years of the Republican era.
The Roman Empire was among the most powerful economic, cultural, political and military forces in the world of its time. It was one of the largest empires in world history. At its height under Trajan, it covered 5 million square kilometers. It held sway over an estimated 70 million people, at that time 21% of the world's entire population. The longevity and vast extent of the empire ensured the lasting influence of Latin and Greek language, culture, religion, inventions, architecture, philosophy, law and forms of government on the empire's descendants. Throughout the European medieval period, attempts were even made to establish successors to the Roman Empire, including the Empire of Romania, a Crusader state; and the Holy Roman Empire. By means of European colonialism following the Renaissance, and their descendant states, Greco-Roman and Judaeo-Christian culture was exported on a worldwide scale, playing a crucial role in the development of the modern world.