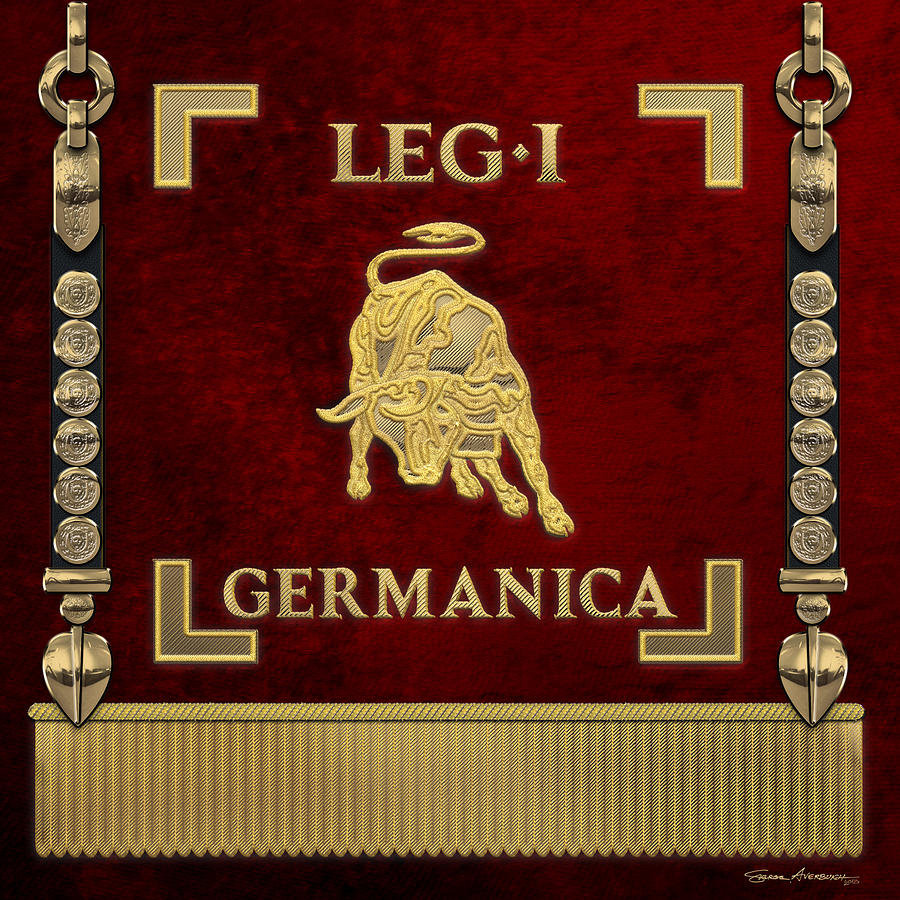 Standard of the 1st Germanic Legion - Vexillum of Legio I Germanica

This original photograph is currently for sale.   At the present time, originals are not offered for sale through the Serge Averbukh - Website secure checkout system.   Please contact the artist directly to inquire about purchasing this original.

Standard of the 1st Germanic Legion - Vexillum of Legio I Germanica

Introducing ‘Rome’ Collection by Serge Averbukh, showcasing new media paintings of various artifacts and symbols of ancient Rome. Here you will find pieces featuring Standard of the 1st Germanic Legion - Vexilloid of Legio I Germanica.
A Roman legion (from Latin legio "military levy, conscription", from legere "to choose") was the largest unit of the Roman army, evolving from 3,000 men in the Roman Republic to over 5,200 men in the Roman Empire, consisting of centuries as the basic units. Until the middle of the first century, ten cohorts (about 5,000 men) made up a Roman Legion. This was later changed to nine cohorts of standard size (with six centuries at 80 men each) with the first cohort being of double strength (five double-strength centuries with 160 men each). For most of the Roman Imperial period, the legions formed the Roman army's elite heavy infantry, recruited exclusively from Roman citizens, while the remainder of the army consisted of auxiliaries, who provided additional infantry and the vast majority of the Roman army's cavalry. (Provincials who aspired to citizenship gained it when honourably discharged from the auxiliaries). The Roman army, for most of the Imperial period, consisted mostly of auxiliaries rather than legions. Many of the legions founded before 40 BC were still active until at least the fifth century, notably Legio V Macedonica, which was founded by Augustus in 43 BC and was in Egypt in the seventh century during the Islamic conquest of Egypt.
Legio I Germanica, the 1st Germanic Legion, was a legion of the Imperial Roman army, possibly founded in 48 BC by Gaius Julius Caesar to fight for him in the civil war against Pompey. The title germanic is a reference to its service in Germany, rather than the place of origin of its soldiers. After the Revolt of the Batavi (AD 70), the remaining men of the Germanica were added to Galba's seventh legion, which became VII Gemina. The emblem of Legio I is unknown, but it was probably Taurus, like all the other legions levied by Caesar (except the V Alaudae).