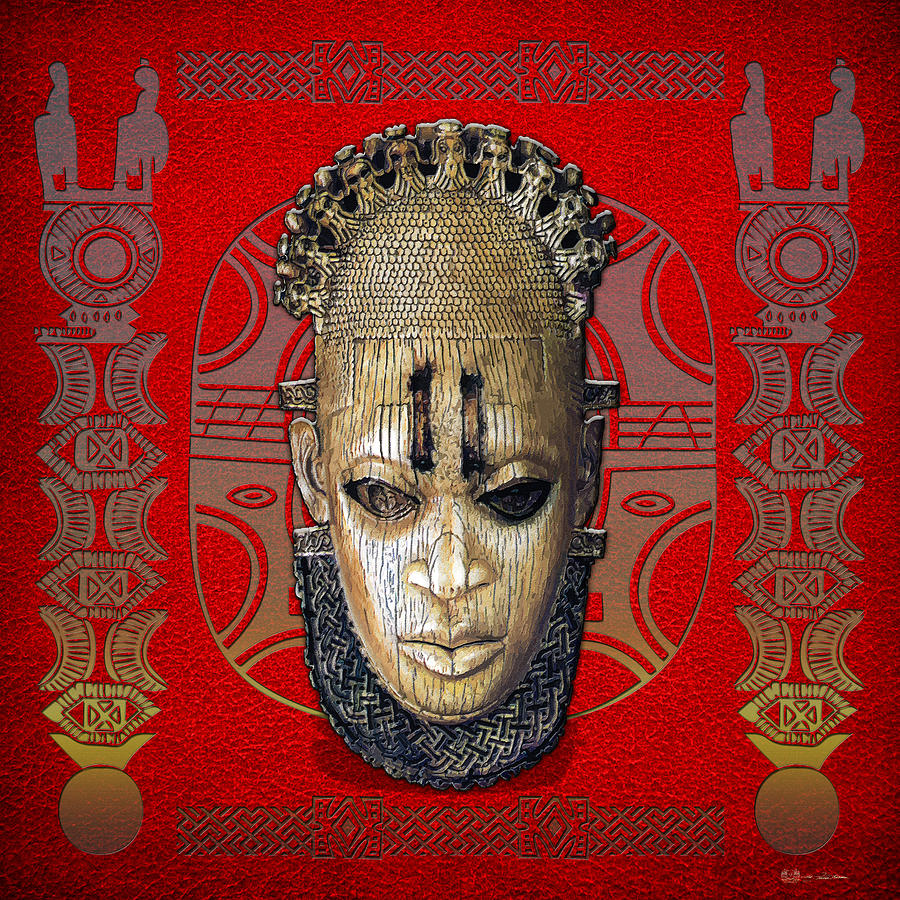 This particular mask is a part of The Michael C. Rockefeller Memorial Collection, Gift of Nelson A. Rockefeller, 1972. Among the most celebrated masterpieces of African art, this pendant is at once a prestige object worn by the king on ceremonial occasions and the portrait of an important historical figure at the court of Benin. The preciousness of the material and the refinement of the carving indicate that it was created by the exclusive guild of royal ivory carvers for the king.
Framed by an elegant tiara-like coiffure and openwork collar, this likeness of an Edo royal woman is in fact a portrait of Idia, mother and close advisor to one of Benin's greatest leaders, Esigie, who ruled in the early sixteenth century. Esigie honored Idia for helping to secure his claim to the throne and for the wise counsel that she provided him throughout his reign. As a consequence of Idia's role, the title of Queen Mother (Iyoba) was introduced to the Benin court, granting the mother of the oba (king) equal authority to that of senior town chiefs.
The miniature motifs of Portuguese faces depicted along the summit make reference to the extraordinary wealth generated in the Benin kingdom in the sixteenth century through trade with the Portuguese. Since the Portuguese arrived by sea, generated local wealth, and have white skin, they were immediately connected to Olokun, god of the sea, who is associated with the color white. Additionally, Olokun is linked to purity, the world of the dead, and fertility. The mudfish motif, which alternates with the Portuguese faces, is one of the primary symbols of Benin kingship. It is associated with the qualities of aggressiveness and liminality due to its ferocious electric sting and its ability to survive in water and on land.
The hollowed back of this work suggests that it was both a pendant and a receptacle, possibly containing medicines to protect the king while worn during ceremonial occasions.
Given the scale of this artifact and the inclusion of suspension lugs above and below the ears, it appears likely that it was worn suspended as a pectoral. Recent ritual practices, however, suggest that related works may alternatively have been worn at the king�s waist.

Congratulations on your recent sale, Serge!