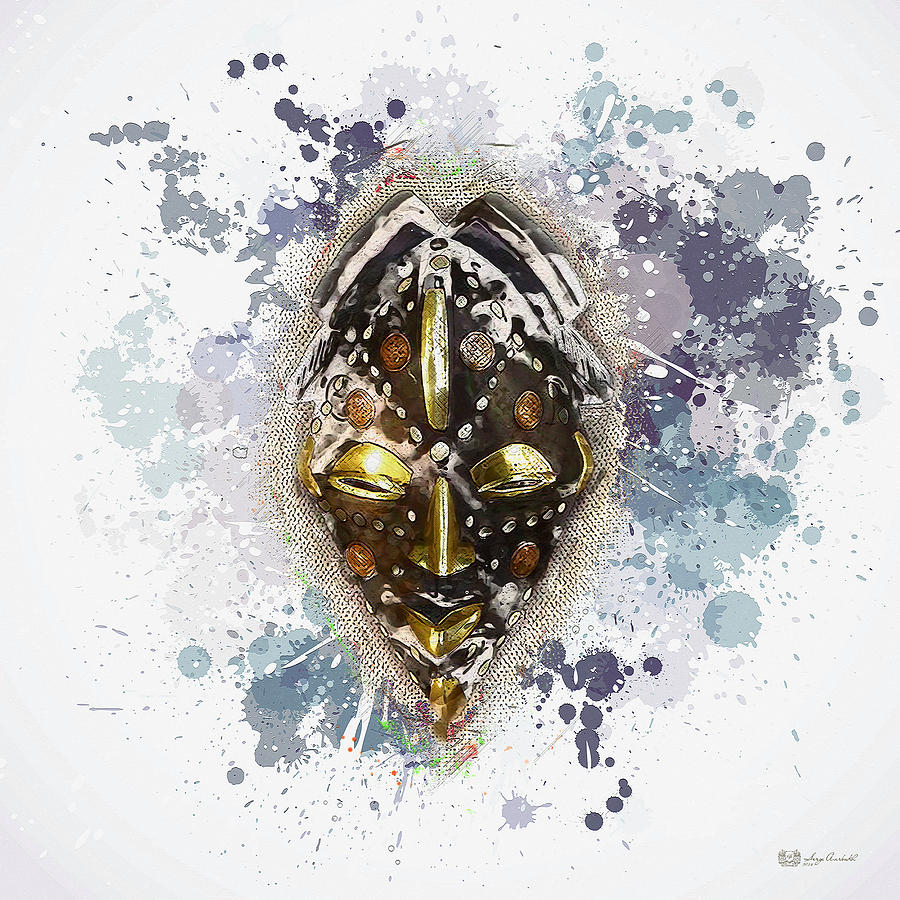 Introducing 'Treasures of Africa' Collection by Serge Averbukh, showcasing convergent media paintings of various historical as well as modern ethnic arts pieces belonging to indigenous peoples and tribes from all around the African continent. Here you will find framed and wrapped/stretched canvas fine art prints, featuring a Punu Prosperity Mask.

The Punu, or Bapunu (Bapounou), are a Bantu group of Central Africa and one of the four major peoples of Gabon, inhabiting interior mountain and grassland areas in the southwest of the country, around the upper N'Gouni� and Nyanga Rivers. Bapunu also live in the Divenie, Kibangou, and Mossendjo districts of the Republic of the Congo. They are linguistically related to the Eshira. Punu traditions record a migration from the south sometime before the 19th century, as a result of wars somewhere between the Congo and Niari River. In the 19th century they gathered rubber, and participated in the slave trade, sending both their own and acquisitions from further inland to Loango and Fernan Vaz. In the present day, the Punu are noted for their cloth made of palm fiber, and for iron weaponry. The Punu were once called Bayaka by others, but they themselves consider this a pejorative.
This type of mask is attributed to the Punu and also the Fang tribes, and it borrows some stylistic elements from the Dan tribe as well, with the idealized triangular-shaped face, pointed chin, and narrow eyes. It is made with bronze inlays, coins from Cameroon, cowrie shells, and even wood dust and glue. It exudes and aura of optimism and serenity, hence the name "Prosperity mask". The Punu people reside along the banks of Upper Ngoume River in Gabon. Punu masks stand out from other African masks due to their Oriental appearance. The masks are representative of the idealized beauty of Punu women. They feature elaborate tall hairdos, nine diamond shaped scar marks on the forehead and almond shaped eyes with arched brows. Some of the masks feature horizontal lines running from ear to ear which are representative of jewelry. They are often painted white with Kaolin clay to represent the spirit world, although there are also less common black Punu masks. The black masks may have played a different role of judgment. White Punu masks also known as Okuye, Mukuyi or Mukudj masks are worn by men in Punu and Lumbo cultures to represent spirits of dead maidens. Dancers wearing the masks also adorn stilts and carry whips.