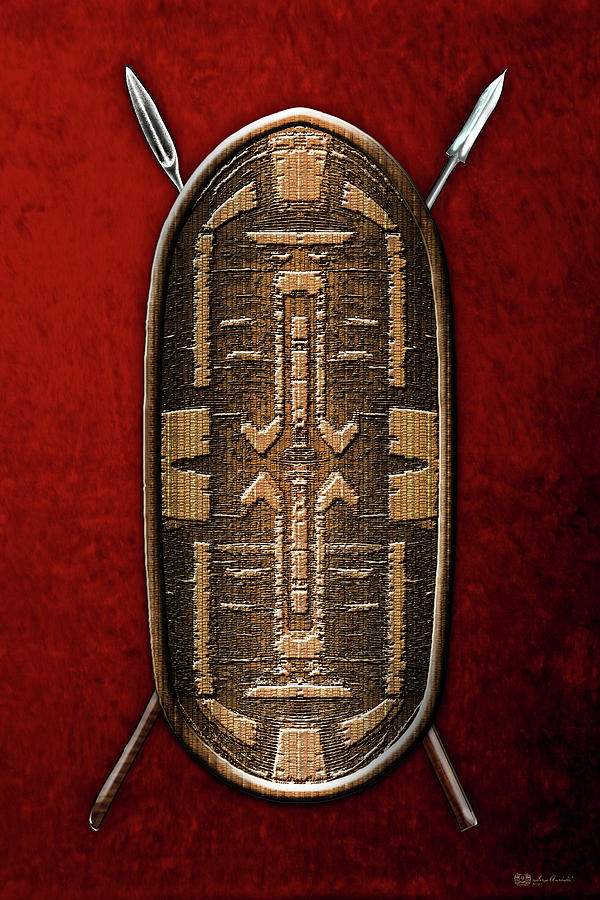 Here you will find pieces featuring a Zande War Shield with Spears on Red Velvet .
The Azande (plural of "Zande" in the Zande language) are an ethnic group of north Central Africa. They live primarily in the northeastern part of the Democratic Republic of the Congo, in South Sudan, and in southeastern Central African Republic. The Congolese Azande live in Orientale Province, specifically along the Uele River; and the Central African Azande live in the districts of Rafai, Zamio, and Obo. The word Azande means the people who possess much land, and refers to their history as conquering warriors. There are many variant spellings of Azande, including: Zande, Zandeh, A-Zandeh, Sandeh, etc. The name Niam-Niam (or Nyam-Nyam) was frequently used by foreigners to refer to the Azande in the 19th and early 20th century. This name is probably of Dinka origin, and means great eaters in that language (as well as being an onomatopoeia), supposedly referring to cannibalistic propensities. This name for the Azande was in use by other tribes in South Sudan, and later adopted by westerners. Today the name Niam-Niam is considered pejorative.

Congratulations on your Sale! Wish you many more :)