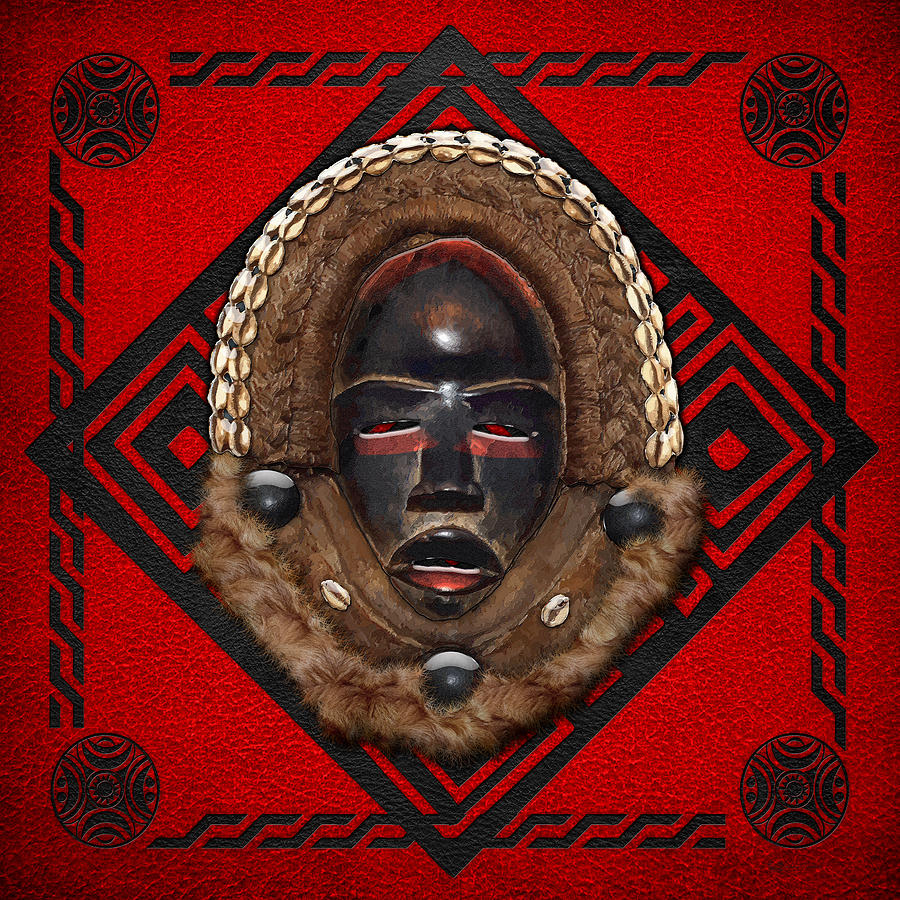 Introducing 'Treasures of Africa' Collection by Serge Averbukh, showcasing convergent media paintings of various historical as well as modern ethnic arts pieces belonging to indigenous peoples and tribes from all around the African continent.. Here you will find framed and wrapped/stretched canvas fine art prints, featuring an African Mask by Dan People of the Ivory Coast and Liberia on red and black leather ethnic African background.
The Gio or Dan people is an ethnic group in north-eastern Liberia and in C�te d'Ivoire. There are approximately 350,000 members of the group, united by the Dan language, a Mande language. Neighboring peoples include the Guere, Guro and Mano. The Dan originally came from the western Sudan region to the north, part of present-day Mali and Guinea. The location and movements of the Dan, Mano, and We can be reconstructed from as early as 1300, at which time the Dan and Mano were located in the savanna region of the northern Ivory Coast. In the sixteenth century, political turmoil, population growth and land depletion caused the Dan to migrate south of the Nimba range and into the high forests. The Dan had a reputation as a fierce warrior society. After Liberia became a nation in 1847, the new government in Monrovia began pacifying the Dan people. By the early 1900s, peace had been achieved, and administrative controls had been established.
Dan arts are notable for wood sculpture, including a huge variety of masks, each with unique forms and purposes. Dan masks are the most important art form of the Dan people. Artisans also produce traditional wooden spoons and mancala board games. The Dan people refer to these masks as gle or ge, terms that refers both to the physical mask and the individual spirits the mask is believed to embody during masquerade performances. Scholars use the terms ge and gle interchangeably to refer both to Dan masks and to invisible, supernatural spirit forces that live in the forest but esteem to enter the civilized world of the village. The only way they can do this, the Dan believe, is through masquerade. In order for a gle to be embodied during a masquerade, an initiated member of a Dan men's society must have a dream that reveals the exact nature of the gle, its intended function, and the masquerade through which the gle would manifest. The council of elders, once they are told of the dream, decides whether the masquerade ensemble should be created for that man to wear and perform.The wooden gle is accompanied by a full-body costume constructed of raffia, feathers and fur. It is believed that each gle has its own personality, preferences, dance and speech patterns and is given a personal name. The wearer of the mask takes on all of these qualities during the masquerade. Having come from the dark, mysterious realm of the forest, a gle is believed to be unpredictable. Therefore, an attendant always accompanies the gle masquerader to control it and interpret its speech. Gle can be divided into two categories: that of dean gle, which is a gentle, peaceful gle without a gender, but whose qualities are thought of as feminine and that of bu gle, which is the war gle named after the sound of a gunshot, whose qualities are thought of as masculine.
The dean gle mask represents an idealized version of Dan beauty. It is characterized by narrow eyes, an oval shape, a smooth forehead, and a mouth slightly open to expose teeth. Dean gle's functions are to teach, entertain and nurture. Bugle masks are designed to frighten. Their eyes are depicted as protruding tubes and the surface of the face has boldly projecting angles. The most powerful bugle masks are decorated with animal and human deposits such a bone and fur.

There are no comments for Dean Gle Mask by Dan People of the Ivory Coast and Liberia on Red Leather.   Click here to post the first comment.