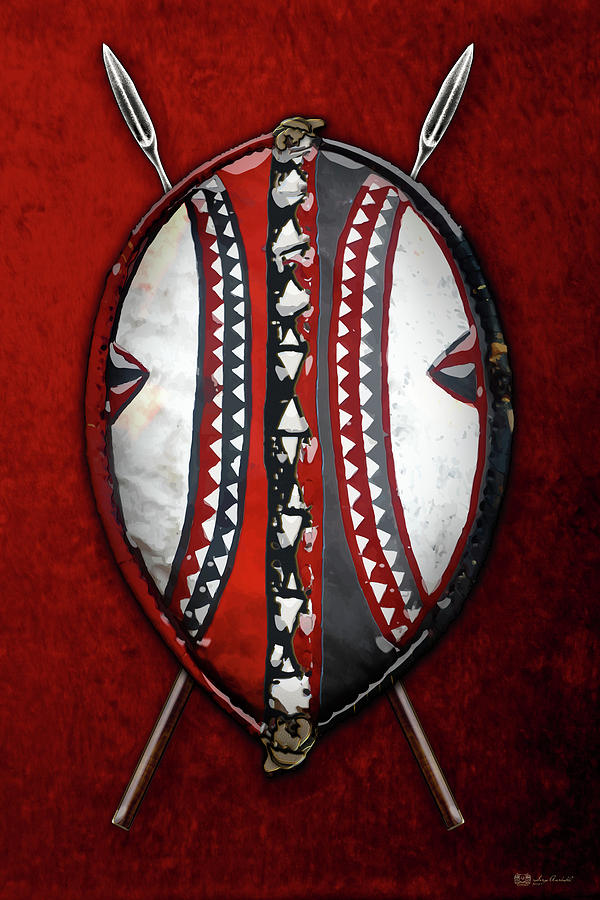 Introducing the War Shields collection by C.7 Design Studio, showcasing meticulous digital reproductions of various historical as well as modern war shields and weapons belonging to indigenous peoples and tribes from all around the world. Here you will find framed and wrapped/stretched canvas fine art prints, featuring a Maasai War Shield with Spears on Red Velvet .
The Maasai (sometimes spelled "Masai" or "Masaai") are a Nilotic ethnic group of semi-nomadic people inhabiting Kenya and northern Tanzania. They are among the best known local populations due to their residence near the many game parks of Southeast Africa, and their distinctive customs and dress. The Maasai speak Maa, a member of the Nilo-Saharan language family that is related to Dinka and Nuer. They are also educated in the official languages of Kenya and Tanzania, Swahili and English.
The Tanzanian and Kenyan governments have instituted programs to encourage the Maasai to abandon their traditional semi-nomadic lifestyle, but the people have continued their age-old customs. Recently, Oxfam has claimed that the lifestyle of the Maasai should be embraced as a response to climate change because of their ability to farm in deserts and scrublands. Many Maasai tribes throughout Tanzania and Kenya welcome visits to their village to experience their culture, traditions, and lifestyle.
The artwork of greatest interest to the young men -- aside from their make-up -- is their shield important in the old days for use in battle. When a young man became a warrior he received from his father a spear, a sword, a club and a shield. These were to defend himself, his village, and its cattle against attacks by men and wild animals. They were also used when raiding other tribes to steal their cattle. Their shields were oval in shape and were made from buffalo hide, stretched over a wooden frame: and they were decorated with geometrical patterns. Like the designs on the shields carried by knights in the Middles Ages, these decorations revealed his identity: one half of the shield indicated the section of the tribe to which the warrior belonged and the other half revealed his age group. Shields also incorporated special battle honours (rather like the medals worn by soldiers in Europe and America) in cases where a man had been particularly heroic. Choosing a day when he was away from camp, his colleagues would take out his shield and add a distinctive mark to proclaim his bravery. This was circular or semi-circular in shape as you can see in two of the illustrations. The Maasai have three traditional colours: black, made from charcoal and red made from powdered soil, both mixed with blood from a bullock; and white made from the ashes of a bullock's bones mixed with water.

Nice, congratulations on your sale.