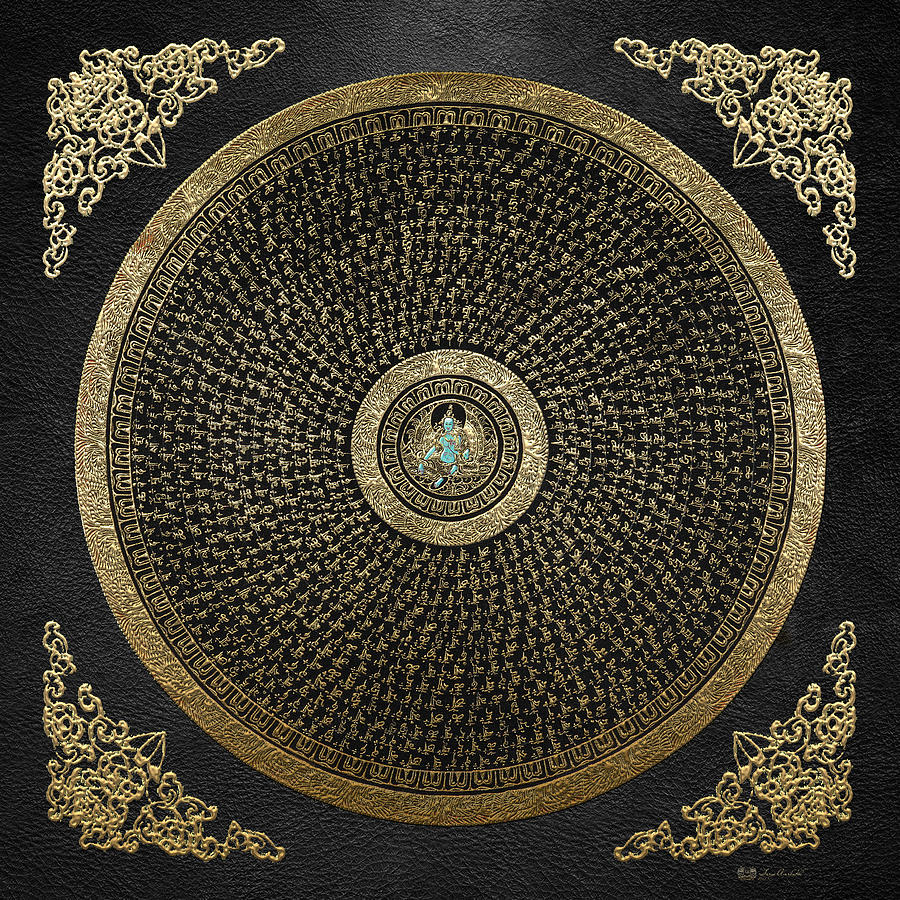 Introducing 'Treasures of Tibet' collection by Serge Averbukh, showcasing convergent media paintings paintings depicting various Tibetan artifacts and works of art. Here you will find framed and wrapped canvas fine art prints, featuring Tibetan Thangka - Green Tara Goddess Mandala with Mantra in Gold on Black.
Mandala is a circle which is a device for the Tantric meditation. It is a visual aid for concentration and introversive meditation leading to the attainment of insights and to activation of forces culminating in Siddhi supernatural forces. The Mandala is the graphic representation of this process.
A thangka, also known as tangka, thanka or tanka is a painting on cotton, or silk appliqu�, usually depicting a Buddhist deity, scene, or mandala of some sort. Thangka is a Nepalese art form exported to Tibet. The thankga is not a flat creation like an oil painting or acrylic painting but consists of a picture panel which is painted or embroidered over which a textile is mounted and then over which is laid a cover, usually silk. Generally, thangkas last a very long time and retain much of their lustre, but because of their delicate nature, they have to be kept in dry places where moisture won't affect the quality of the silk. It is sometimes called a scroll-painting.
These thangka served as important teaching tools depicting the life of the Buddha, various influential lamas and other deities and bodhisattvas. One subject is The Wheel of Life, which is a visual representation of the Abhidharma teachings (Art of Enlightenment).
Thangka, when created properly, perform several different functions. Images of deities can be used as teaching tools when depicting the life (or lives) of the Buddha, describing historical events concerning important Lamas, or retelling myths associated with other deities. Devotional images act as the centerpiece during a ritual or ceremony and are often used as mediums through which one can offer prayers or make requests. Overall, and perhaps most importantly, religious art is used as a meditation tool to help bring one further down the path to enlightenment.
Tara or Arya Tara, also known as Jetsun Dolma in Tibetan Buddhism, is a female Bodhisattva in Mahayana Buddhism who appears as a female Buddha in Vajrayana Buddhism. She is known as the "mother of liberation", and represents the virtues of success in work and achievements. In Japan she is known as Tara Bosatsu , and little-known as Duoluo Pusa Chinese Buddhism. Tara is a tantric meditation deity whose practice is used by practitioners of the Tibetan branch of Vajrayana Buddhism to develop certain inner qualities and understand outer, inner and secret teachings about compassion and emptiness. Tara is actually the generic name for a set of Buddhas or bodhisattvas of similar aspect. These may more properly be understood as different aspects of the same quality, as bodhisattvas are often considered metaphors for Buddhist virtues. Green Tara, (Syamatara) known as the Buddha of enlightened activity.