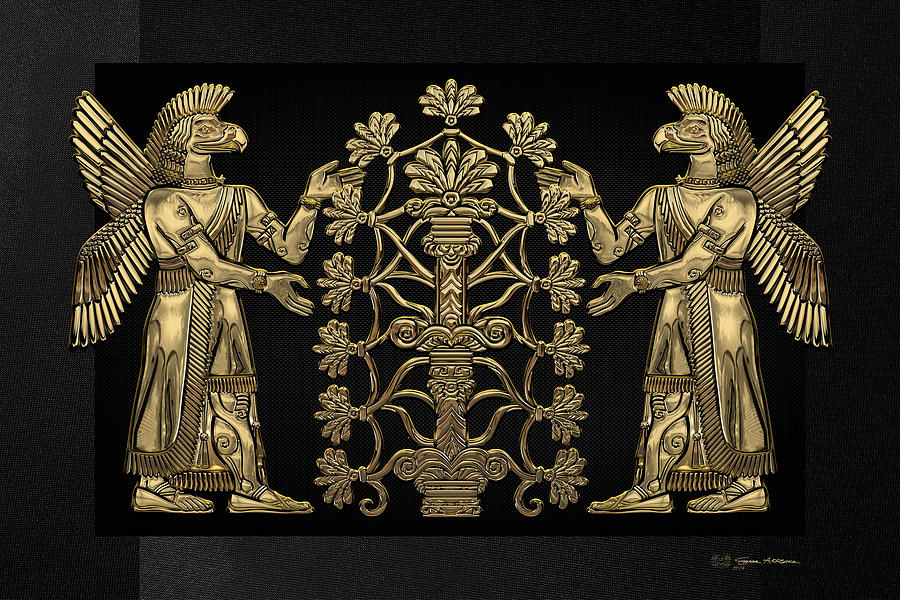 Introducing ‘Treasures of Mesopotamia’ Collection by Serge Averbukh, showcasing new media paintings of various historical artifacts and symbols from the region. Here you will find pieces featuring Sumerian Deities - Silver God Ninurta over Red Velvet.
Mesopotamia is a historical region in West Asia situated within the Tigris–Euphrates river system, in modern days roughly corresponding to most of Iraq plus Kuwait, the eastern parts of Syria, Southeastern Turkey, and regions along the Turkish–Syrian and Iran–Iraq borders.
The Sumerians and Akkadians (including Assyrians and Babylonians) dominated Mesopotamia from the beginning of written history (c. 3100 BC) to the fall of Babylon in 539 BC, when it was conquered by the Achaemenid Empire. It fell to Alexander the Great in 332 BC, and after his death, it became part of the Greek Seleucid Empire. Mesopotamia is the site of the earliest developments of the Neolithic Revolution from around 10,000 BC. It has been identified as having "inspired some of the most important developments in human history including the invention of the wheel, the planting of the first cereal crops and the development of cursive script, mathematics, astronomy and agriculture.
Sumer is the earliest known civilization in the historical region of southern Mesopotamia, modern-day southern Iraq, during the Chalcolithic and Early Bronze ages, and arguably the first civilization in the world with Ancient Egypt and the Indus Valley. Living along the valleys of the Tigris and Euphrates, Sumerian farmers were able to grow an abundance of grain and other crops, the surplus of which enabled them to settle in one place. Proto-writing in the prehistory dates back to c. 3000 BC. The earliest texts come from the cities of Uruk and Jemdet Nasr and date back to 3300 BC; early cuneiform script writing emerged in 3000 BC.
In Mesopotamian religion, Ninurta was a god of law, scribes, farming, and hunting. In Lagash he was identified with the city god Ningirsu. In the early days of Assyriology, the name was often transliterated Ninib or Ninip and he was sometimes analyzed as a solar deity. Ninurta often appears holding a bow and arrow, a sickle sword, or a mace; the mace, named Sharur, is capable of speech and can take the form of a winged lion, possibly representing an archetype for the later Shedu.
In Nippur, Ninurta was worshiped as part of a triad of deities including his father, Enlil and his mother, Ninlil. In variant mythology, his mother is said to be the harvest goddess Ninhursag. The consort of Ninurta was Ugallu in Nippur and Bau when he was called Ningirsu.
In another legend, Ninurta battles a birdlike monster called Imdugud or Anzû; a Babylonian version relates how the monster steals the Tablet of Destinies—believed to contain the details of fate and the future—from Enlil. Ninurta slays each of the monsters later known as the "Slain Heroes" (the Warrior Dragon, the Palm Tree King, Lord Saman-ana, the Bison-beast, the Mermaid, the Seven-headed Snake, the Six-headed Wild Ram), and despoils them of valuable items such as Gypsum, Strong Copper, and the Magilum boat. Eventually, Ninurta kills Anzû and returns the Tablet of Destinies to his father Enlil.
There are many parallels with both and the story of Marduk, who slew Tiamat and delivered the Tablets of Destiny from Kingu to his father Enki. A number of scholars have suggested that either the god Ninurta or the Assyrian king Tukulti-Ninurta I may have been the inspiration for the Biblical character Nimrod.
The concept of a tree of life is a widespread myth (mytheme) or archetype in the world's mythologies, related to the concept of sacred tree more generally, and hence in religious and philosophical tradition. The tree of knowledge, connecting to heaven and the underworld, and the tree of life, connecting all forms of creation, are both forms of the world tree or cosmic tree, and are portrayed in various religions and philosophies as the same tree. The Mesopotamian Tree of Life was represented by a series of nodes and criss-crossing lines. It was apparently an important religious symbol, often attended to in palace reliefs by human or eagle-headed winged genies, or the King, and blessed or fertilized with bucket and cone. The Epic of Gilgamesh is a similar quest for immortality. In Mesopotamian mythology, Etana searches for a 'plant of birth' to provide him with a son.

Congrats on your recent sale!

Awesome! Congrats on the sale!