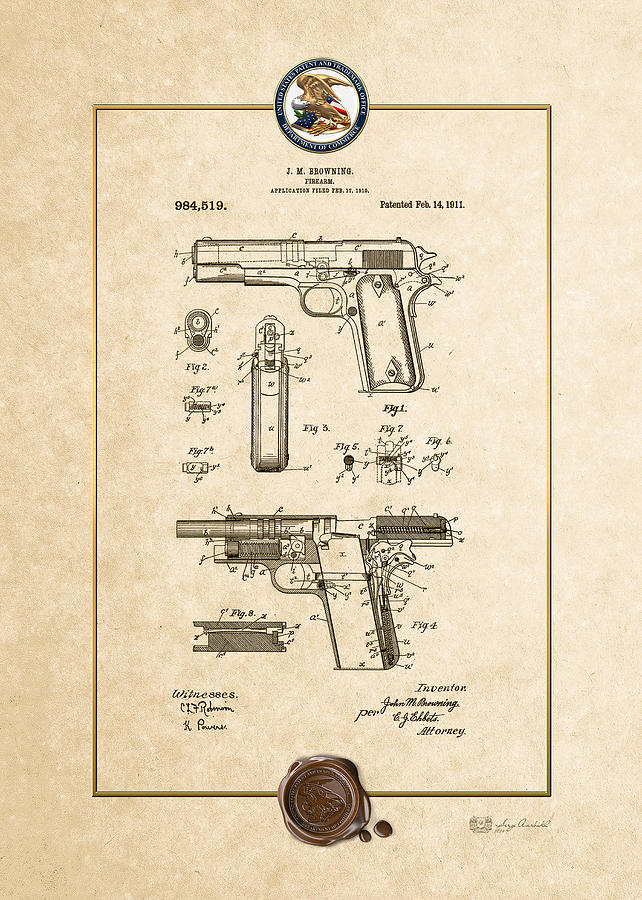 Introducing Vintage Patents - Weapons and Firearms collection by C.7 Design Studio, showcasing meticulous digital reproductions of historical patent and blueprint documents, digitally enhanced and transformed into large format prints, stylized to preserve look and feel of various mediums, accompanied by stunning 2.5D elements. Here you will find framed and wrapped/stretched canvas fine art prints, featuring reproduction of the original patent # 984519 for a Colt 1911 pistol, issued to inventor John M. Browning in 1911.
The M1911 is a single-action, semi-automatic, magazine-fed, recoil-operated pistol chambered for the .45 ACP cartridge. It served as the standard-issue sidearm for the United States Armed Forces from 1911 to 1985. It was first used in later stages of the Philippine-American War, and was widely used in World War I, World War II, the Korean War, and the Vietnam War. The pistol's formal designation as of 1940 was Automatic Pistol, Caliber .45, M1911 for the original model of 1911 or Automatic Pistol, Caliber .45, M1911A1 for the M1911A1, adopted in 1924. The designation changed to Pistol, Caliber .45, Automatic, M1911A1 in the Vietnam era.
In total, the U.S. procured around 2.7 million M1911 and M1911A1 pistols in military contracts during its service life. The M1911 was replaced by the 9mm Beretta M9 pistol as the standard U.S. sidearm in the early 1990s, but due to its popularity among users, it has not been completely phased out. Modernized derivative variants of the M1911 are still in use by some units of the U.S. Army Special Forces, the U.S. Navy and U.S. Marine Corps.
Designed by John Browning, the M1911 is the best-known of his designs to use the short recoil principle in its basic design. The pistol was widely copied, and this operating system rose to become the preeminent type of the 20th century and of nearly all modern centerfire pistols. It is popular with civilian shooters in competitive events such as USPSA, IDPA, International Practical Shooting Confederation, and Bullseye shooting. Compact variants are popular civilian concealed carry weapons, because of the design's relatively slim width and the power of the .45 ACP cartridge.

Congratulations on your new sale