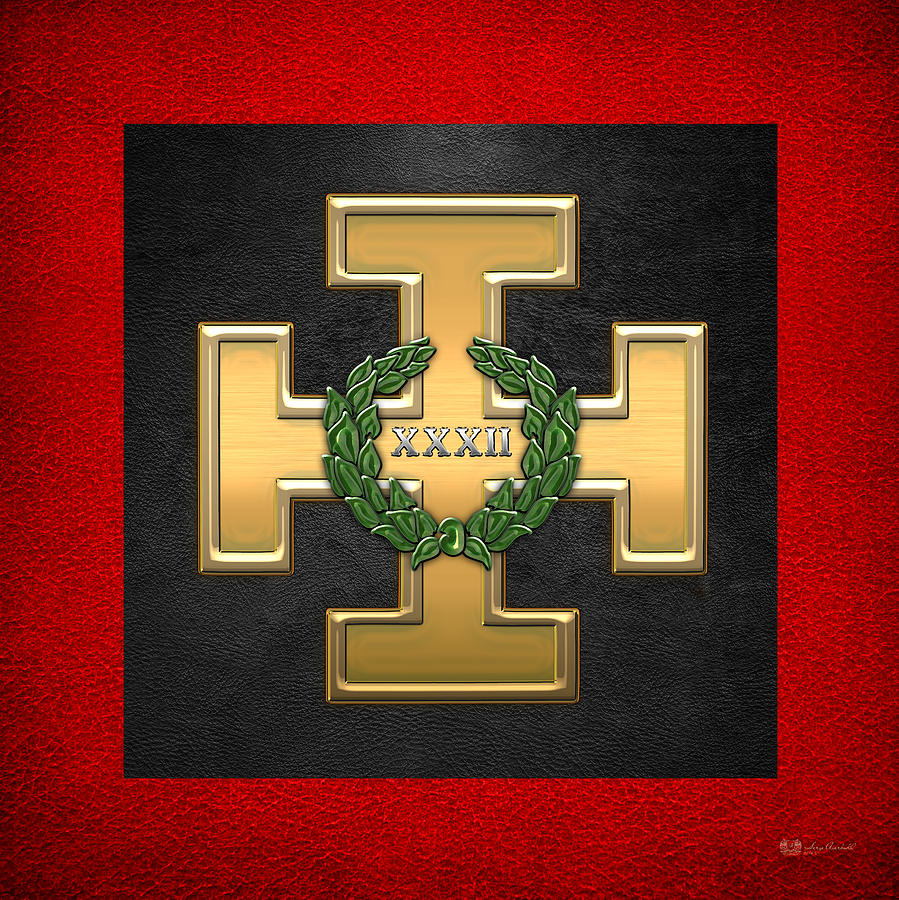 Here you will find pieces featuring 32nd Degree - Master of the Royal Secret (known as Sublime Prince of the Royal Secret in the Northern Jurisdiction and in Canada) Masonic Jewel on Black and Red Leather.
Freemasonry is a fraternal organization that arose from obscure origins in the late 16th to early 17th century. Freemasonry now exists in various forms all over the world, with a membership estimated at around six million. The fraternity is administratively organized into independent Grand Lodges or sometimes Orients, each of which governs its own jurisdiction, which consists of subordinate (or constituent) Lodges. There are also appending bodies, which are organizations related to the main branch of Freemasonry, but with their own independent administration.
The Ancient and Accepted Scottish Rite of Freemasonry (the Northern Masonic Jurisdiction in the United States often omits the and, while the English Constitution in the United Kingdom omits the Scottish), commonly known as simply the Scottish Rite, is one of several Rites of Freemasonry. A Rite is a progressive series of degrees conferred by various Masonic organizations or bodies, each of which operates under the control of its own central authority. In the Scottish Rite the central authority is called a Supreme Council. The Scottish Rite is one of the appendant bodies of Freemasonry that a Master Mason may join for further exposure to the principles of Freemasonry. In England and some other countries, while the Scottish Rite is not accorded official recognition by the Grand Lodge, there is no prohibition against a Freemason electing to join it. In the United States, however, the Scottish Rite is officially recognized by Grand Lodges as an extension of the degrees of Freemasonry. The Scottish Rite builds upon the ethical teachings and philosophy offered in the craft lodge, or Blue Lodge, through dramatic presentation of the individual degrees.
The lessons of the 32� are: a Soldier of the Light seeks truth and knowledge; a Soldier of Freedom demands for the people free vote and voice and attains freedom of voice, vote and opinion for himself; a Soldier of the True Religion combats spiritual tyranny with reason and truth; a Soldier of the People encourages men to be self-reliant and independent; a Soldier of Scottish Rite Masonry is zealous and ardent in the performance of his duties to God, his country, his family, his brethren and himself. The lessons of this degree are that "genuine brotherhood requires mutual regard, opinion, esteem and charity". We always look for the good in all, make allowances for other's short comings. We trust the Supreme Architect to lead us to friendship, morality and brotherly love. The apron is white, lined in black, with a double-headed eagle and a plan of the Camp of the Princes. The jewel is a golden Teutonic cross, with a double-headed white and black eagle in the center.