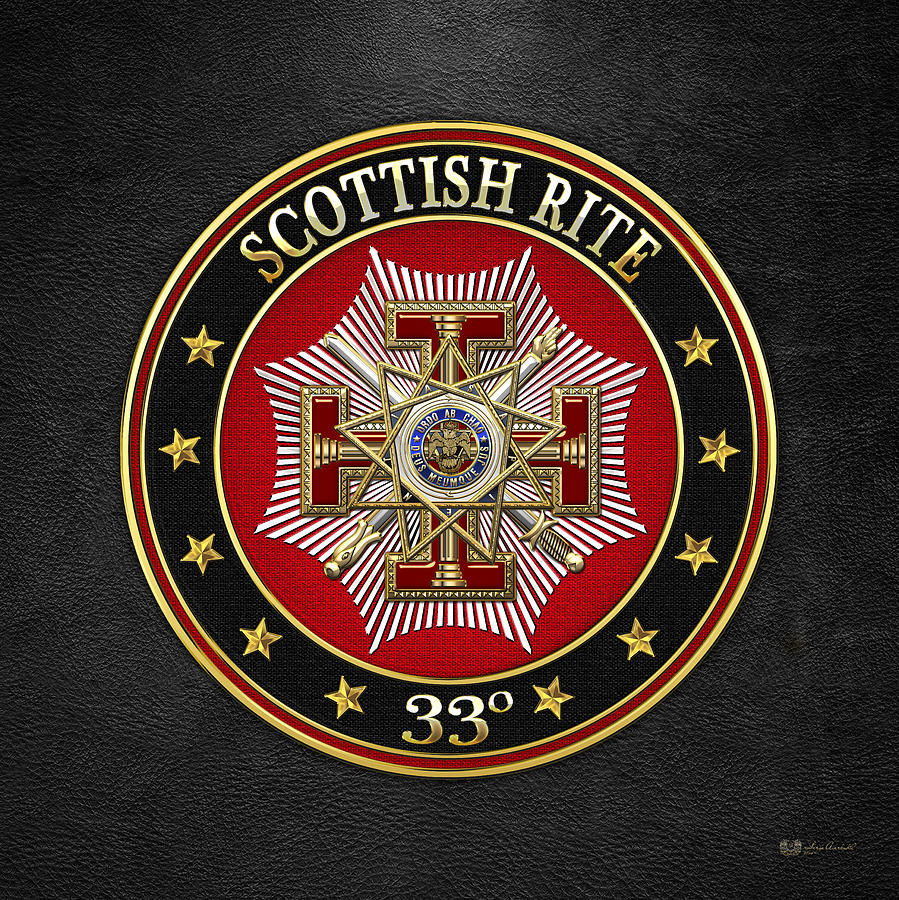 Here you will find pieces featuring 33rd Degree - Inspector General or Knight Commander of the Court of Honour Jewel on Black Leather.
Freemasonry is a fraternal organization that arose from obscure origins in the late 16th to early 17th century. Freemasonry now exists in various forms all over the world, with a membership estimated at around six million. The fraternity is administratively organized into independent Grand Lodges or sometimes Orients, each of which governs its own jurisdiction, which consists of subordinate (or constituent) Lodges. There are also appending bodies, which are organizations related to the main branch of Freemasonry, but with their own independent administration.
The Ancient and Accepted Scottish Rite of Freemasonry (the Northern Masonic Jurisdiction in the United States often omits the and, while the English Constitution in the United Kingdom omits the Scottish), commonly known as simply the Scottish Rite, is one of several Rites of Freemasonry. A Rite is a progressive series of degrees conferred by various Masonic organizations or bodies, each of which operates under the control of its own central authority. In the Scottish Rite the central authority is called a Supreme Council. The Scottish Rite is one of the appendant bodies of Freemasonry that a Master Mason may join for further exposure to the principles of Freemasonry. In England and some other countries, while the Scottish Rite is not accorded official recognition by the Grand Lodge, there is no prohibition against a Freemason electing to join it. In the United States, however, the Scottish Rite is officially recognized by Grand Lodges as an extension of the degrees of Freemasonry. The Scottish Rite builds upon the ethical teachings and philosophy offered in the craft lodge, or Blue Lodge, through dramatic presentation of the individual degrees.
The Thirty-third Degree is conferred by the Supreme Council upon members of the Rite in recognition of outstanding work in the Rite or in public life. At its biennial session, the Supreme Council elects members of the Rite to receive the degree. Members unanimously so elected become honorary members of the Supreme Council. The Thirty-third Degree may not be requested, and if requested must be refused. The degree is granted solely out of recognition for outstanding services. These 33� Masons are Inspectors General Honorary and honorary members of the Supreme Council. The active members of the Supreme Council are chosen from among them. The cap for an Inspector General Honorary is white with a white band edged in gold, featuring the symbol for this honorary degree, a red slanting Patriarchal Cross. The 33� jewel is described as follows.
The Grand Decorations of The Order rest upon a Teutonic Cross. They are a nine-pointed Star, namely, one formed by three triangles of gold, one upon the other, and interlaced. From the lower part of the left side to the upper part of the right, a Sword extends, and in the opposite direction is a hand of (as it is called), Justice. In the center of the Shield of The Order, azure, charged with an Eagle like that on the Banner, having on the dexter side a Balance, or, and on the sinister side a Compass of the second, united with a Square of the second. Around the whole Shield runs a band of the first, with the Latin Inscription, of the second, �ORDO AB CHAO�; which band is enclosed by two circles, formed by two Serpents of the second, each biting his own tail. Of the smaller triangles that are formed by the intersection of the greater ones, those nine that are nearest the band are of crimson color, and each of them has one of the letters that compose the word S.A.P.I.E.NT.IA.

Congratulations on your sale of this wonderful artwork! Fl