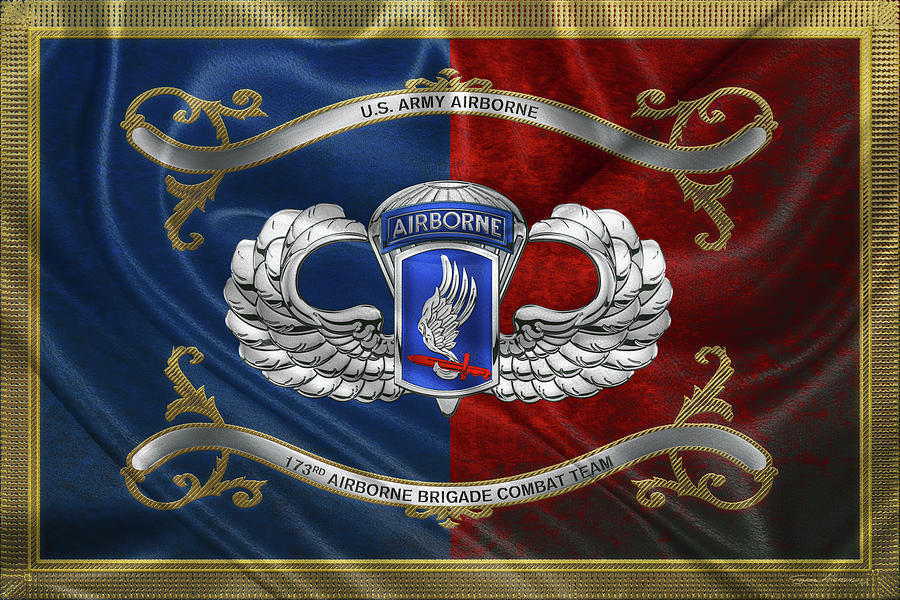 Introducing 'Military Insignia & Heraldry' collection by Serge Averbukh, showcasing stunning new media paintings featuring a wide range of military and government heraldry. Here you will find pieces featuring 173rd Airborne Brigade Combat Team - 173rd ABCT Insignia with Parachutist Jump Wings Badge over Flag.
The 173rd Airborne Brigade Combat Team (173rd ABCT) ("Sky Soldiers") is an airborne infantry brigade combat team of the United States Army based in Vicenza, Italy. It is the United States European Command's conventional airborne strategic response force for Europe.
Activated in 1915, as the 173rd Infantry Brigade, the unit saw service in World War II but is best known for its actions during the Vietnam War. The brigade was the first major United States Army ground formation deployed in Vietnam, serving there from 1965 to 1971 and losing almost 1,800 soldiers. Noted for its roles in Operation Hump and Operation Junction City, the 173d is best known for the Battle of Dak To, where it suffered heavy casualties in close combat with North Vietnamese forces. Brigade members received over 7,700 decorations, including more than 6,000 Purple Hearts. The brigade returned to the United States in 1972, where the 1st and 2d Battalion, 503d Infantry, were absorbed into the 3d Brigade, 101st Airborne Division (Airmobile), and the 3d Battalion, 319th Field Artillery was reassigned to Division Artillery in the 101st. The remaining units of the 173d were inactivated.
Since its reactivation in 2000, the brigade served five tours in the Middle East in support of the War on Terror. The 173d participated in the initial invasion of Iraq during Operation Iraqi Freedom in 2003, and had four tours in Afghanistan in support of Operation Enduring Freedom in 2005–06, 2007–08, 2009–10, and 2012–13. The brigade returned most recently from a deployment stretching from late 2013 to late 2014.
The 173rd Airborne Brigade Combat Team has received 21 campaign streamers and several unit awards, including the Presidential Unit Citation for its actions during the Battle of Dak To during the Vietnam War.

There are no comments for 173rd Airborne Brigade Combat Team - 173rd A B C T Insignia with Parachutist Badge over Flag.   Click here to post the first comment.