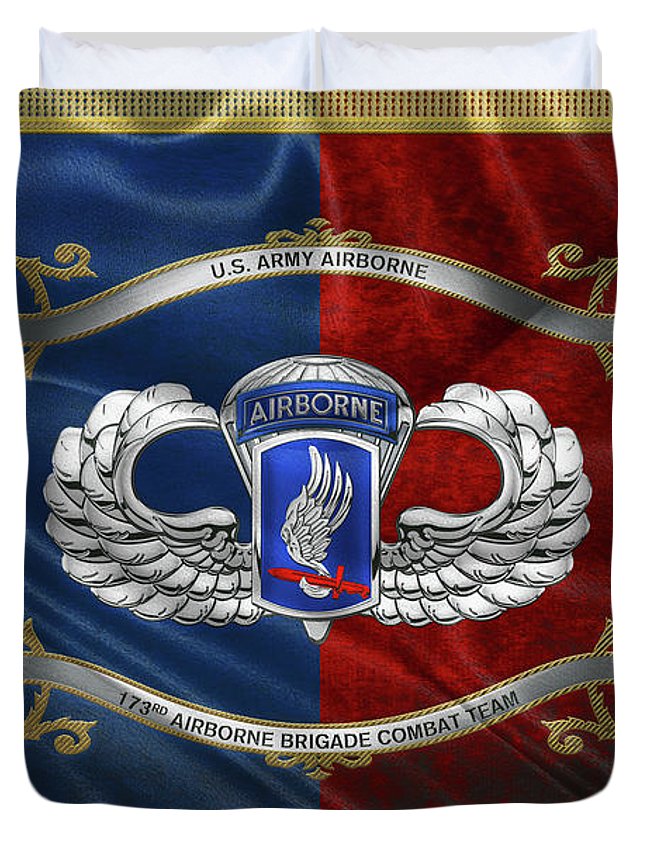 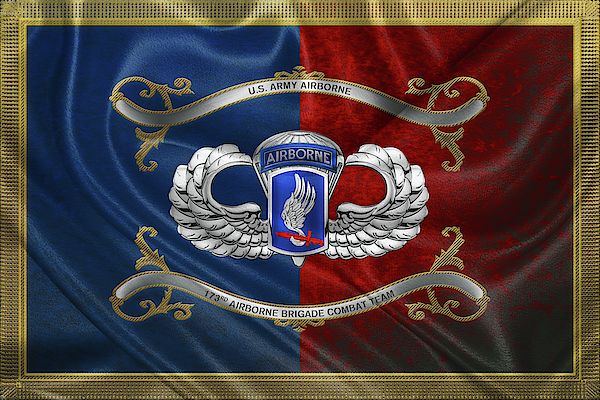 Queen duvet cover (88" x 88") featuring the image "173rd Airborne Brigade Combat Team - 173rd A B C T Insignia with Parachutist Badge over Flag" by Serge Averbukh. Our soft microfiber duvet covers are hand sewn and include a hidden zipper for easy washing and assembly. Your selected image is printed on the top surface with a soft white surface underneath. All duvet covers are machine washable with cold water and a mild detergent.

There are no comments for 173rd Airborne Brigade Combat Team - 173rd A B C T Insignia with Parachutist Badge over Flag.   Click here to post the first comment.

Introducing 'Military Insignia & Heraldry' collection by Serge Averbukh, showcasing stunning new media paintings featuring a wide range of military and government heraldry. Here you will find pieces featuring 173rd Airborne Brigade Combat Team - 173rd ABCT Insignia with Parachutist Jump Wings Badge over Flag. The 173rd Airborne Brigade Combat Team (173rd ABCT) ("Sky Soldiers") is an airborne infantry brigade combat team of the United States Army based in Vicenza, Italy. It is the United States European Command's conventional airborne strategic response force for Europe. Activated in 1915, as the 173rd Infantry Brigade, the unit saw service in World War II but is best known for its actions during the Vietnam War. The brigade was the first major United States Army ground formation deployed in Vietnam, serving there from 1965 to 1971 and losing almost 1,800 soldiers. Noted for its roles in Operation Hump and Operation Junction City, the 173d is best known for the Battle of Dak To, where...