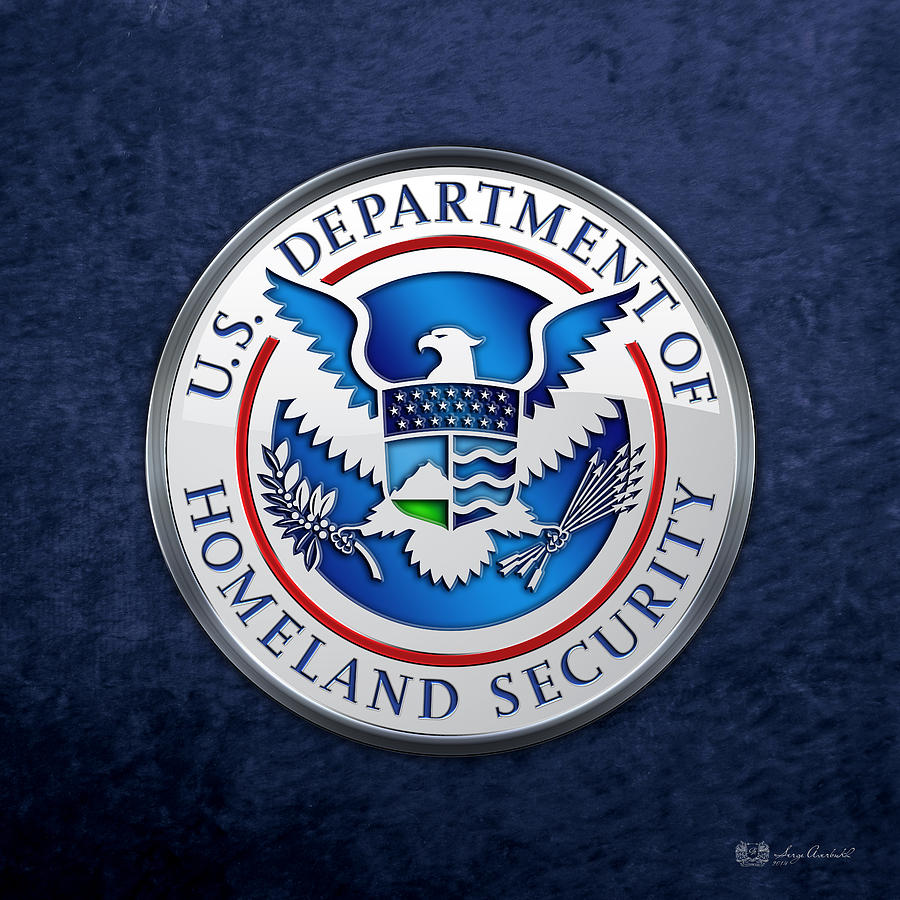 Introducing 'Military Insignia & Heraldry' collection by Serge Averbukh, showcasing military and government heraldry artwork. Here you will find framed and wrapped/stretched canvas fine art prints, featuring the Department of Homeland Security (DHS) Emblem on Blue Velvet.
The Department of Homeland Security (DHS) is a cabinet department of the United States federal government, created in response to the September 11 attacks, and with the primary responsibilities of protecting the United States and its territories (including protectorates) from and responding to terrorist attacks, man-made accidents, and natural disasters. The Department of Homeland Security, and not the United States Department of the Interior, is equivalent to the Interior ministries of other countries.
Where the Department of Defense is charged with military actions abroad, the Department of Homeland Security works in the civilian sphere to protect the United States within, at, and outside its borders. Its stated goal is to prepare for, prevent, and respond to domestic emergencies, particularly terrorism. On March 1, 2003, DHS absorbed the Immigration and Naturalization Service and assumed its duties. In doing so, it divided the enforcement and services functions into two separate and new agencies: Immigration and Customs Enforcement and Citizenship and Immigration Services. The investigative divisions and intelligence gathering units of the INS and Customs Service were merged forming Homeland Security Investigations. Additionally, the border enforcement functions of the INS, including the U.S. Border Patrol, the U.S. Customs Service, and the Animal and Plant Health Inspection Service were consolidated into a new agency under DHS: U.S. Customs and Border Protection. The Federal Protective Service falls under the National Protection and Programs Directorate.
With more than 200,000 employees, DHS is the third largest Cabinet department, after the Departments of Defense and Veterans Affairs. Homeland security policy is coordinated at the White House by the Homeland Security Council. Other agencies with significant homeland security responsibilities include the Departments of Health and Human Services, Justice, and Energy.