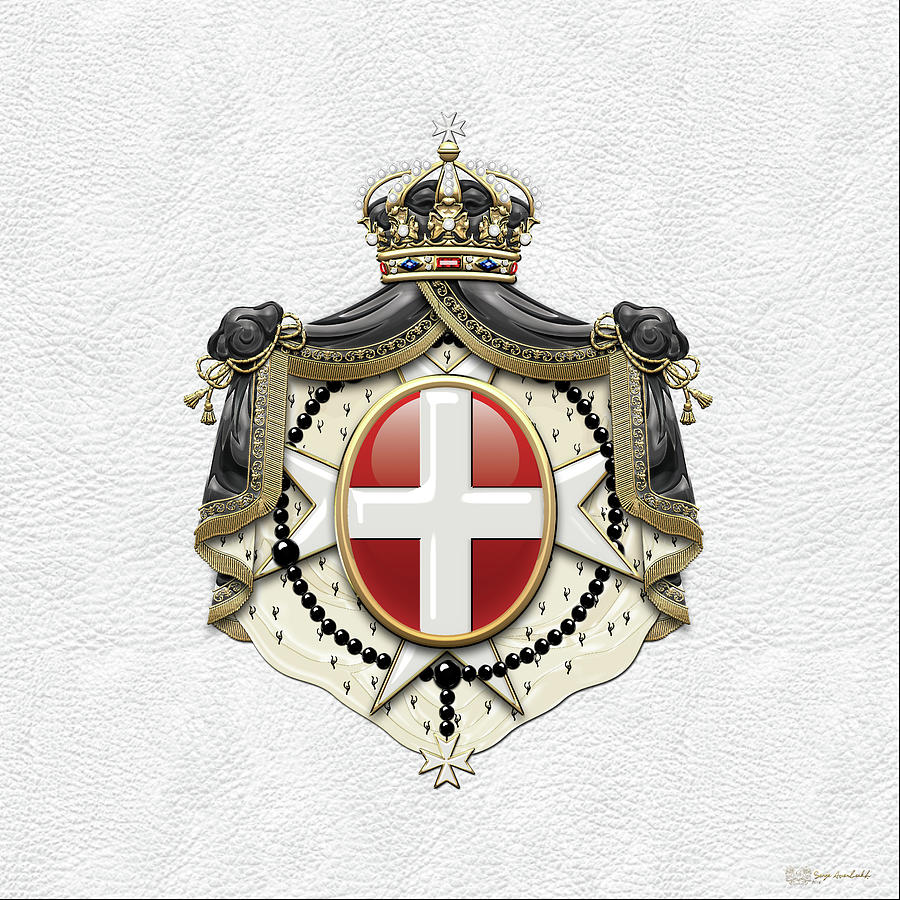 Introducing 'Ancient Brotherhoods' Collection by Serge Averbukh, showcasing heraldry and insignia of various historical brotherhoods, societies and orders. Here you will find framed and wrapped canvas fine art prints, showcasing a Sovereign Military Order of Malta (SMOM) Coat of Arms over White Leather.
The Sovereign Military Hospitaller Order of Saint John of Jerusalem of Rhodes and of Malta (Italian: Sovrano Militare Ordine Ospedaliero di San Giovanni di Gerusalemme di Rodi e di Malta), also known as the Sovereign Military Order of Malta (SMOM), Order of Malta or Knights of Malta, is a Roman Catholic lay religious order of, traditionally, a military, chivalrous and noble nature. It is the world's oldest surviving order of chivalry. The Sovereign Military Order of Malta is headquartered in Rome, Italy, and is widely considered a sovereign subject of international law.
SMOM is the modern continuation of the original medieval order of Saint John of Jerusalem, known as the "Fraternitas Hospitalaria" and later as the Knights Hospitaller, a group founded in Jerusalem around the year 1050 as an Amalfitan hospital to provide care for poor and sick pilgrims to the Holy Land. After the conquest of Jerusalem in 1099 during the First Crusade, it became a military order under its own charter. Following the loss of Christian held territories of the Holy Land to Muslims, the order operated from Rhodes (1310-1523), and later from Malta (1530-1798), over which it was sovereign.
Although this state came to an end with the ejection of the order from Malta by Napoleon Bonaparte, the order as such survived. It retains its claims of sovereignty under international law and has been granted permanent observer status at the United Nations. The order is notable for issuing its own international passports for travel, postal stamps, along with its formal insignia, often portrayed as a white or gold Maltese cross. The order nominally invokes the Blessed Virgin Mary under the venerated Marian title of "Our Lady of Mount Philermos" as its patroness and spiritual intercessor.
Today the order has about 13,000 members, including Knights and Dames as well as auxiliary members; 80,000 permanent volunteers; and 20,000 medical personnel including doctors, nurses, auxiliaries and paramedics in more than 120 countries. The goal is to assist the elderly, handicapped, refugeed, children, homeless, those with terminal illness and leprosy in all parts of the world, without distinction of race or religion. In several countries including France, Germany and Ireland - the local associations of the order are important providers of first aid training, first aid services and emergency medical services. Through its worldwide relief corps' Malteser International' the order is also engaged to aid victims of natural disasters, epidemics and armed conflicts.