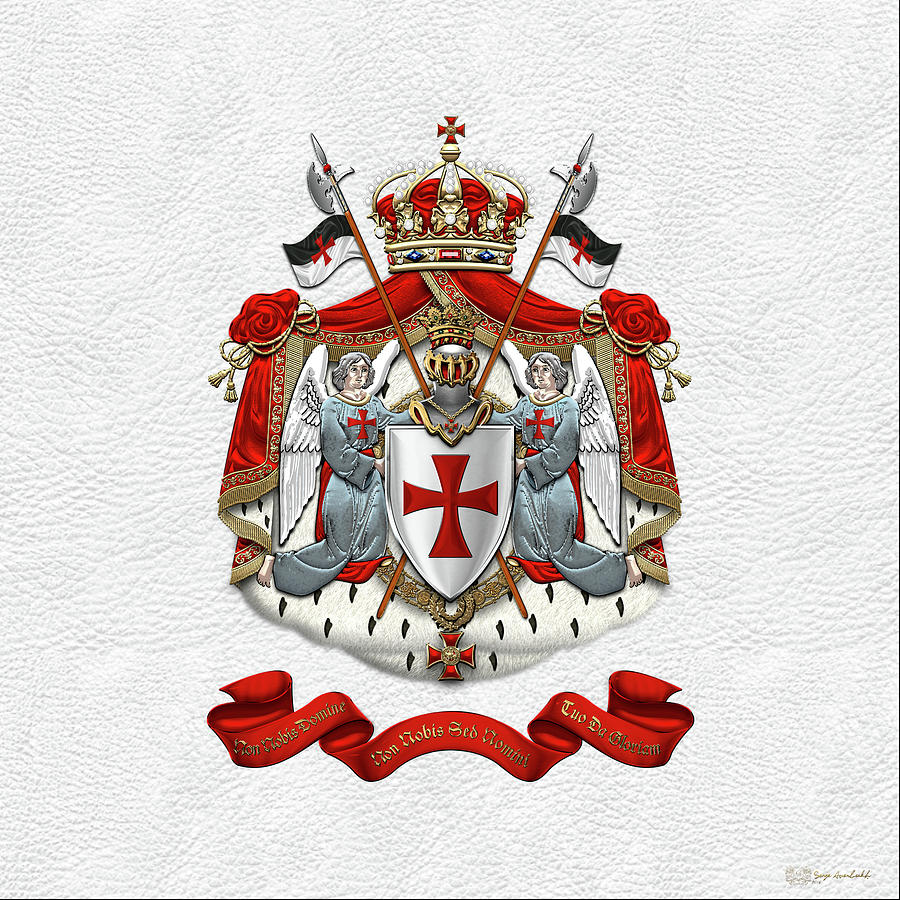 Introducing 'Ancient Brotherhoods' collection by Serge Averbukh, showcasing convergent media paintings depicting heraldry and insignia of various historical and modern brotherhoods, societies and orders.
Here you will find pieces featuring Knights Templar - Coat of Arms over White Leather.
The Poor Fellow-Soldiers of Christ and of the Temple of Solomon (Latin: Pauperes commilitones Christi Templique Salomonici), commonly known as the Knights Templar, the Order of Solomon's Temple (French: Ordre du Temple or Templiers) or simply as Templars, were among the wealthiest and most powerful of the Western Christian military orders. They were prominent in Christian finance. The organization existed for nearly two centuries during the Middle Ages.
Officially endorsed by the Roman Catholic Church around 1129, the order became a favoured charity throughout Christendom and grew rapidly in membership and power. Templar knights, in their distinctive white mantles with a red cross, were among the most skilled fighting units of the Crusades. Non-combatant members of the order managed a large economic infrastructure throughout Christendom, developing innovative financial techniques that were an early form of banking, and building fortifications across Europe and the Holy Land.

The Templars were closely tied to the Crusades; when the Holy Land was lost, support for the order faded. Rumours about the Templars' secret initiation ceremony created distrust, and King Philip IV of France – deeply in debt to the order – took advantage of the situation to gain control over them. In 1307 he had many of the order's members in France arrested, tortured into giving false confessions, and burned at the stake. Pope Clement V disbanded the order in 1312 under pressure from King Philip.
The abrupt reduction in power of a significant group in European society gave rise to speculation, legend, and legacy through the ages. The re-use of their name for later organizations has kept the name "Templar" alive to the modern day.