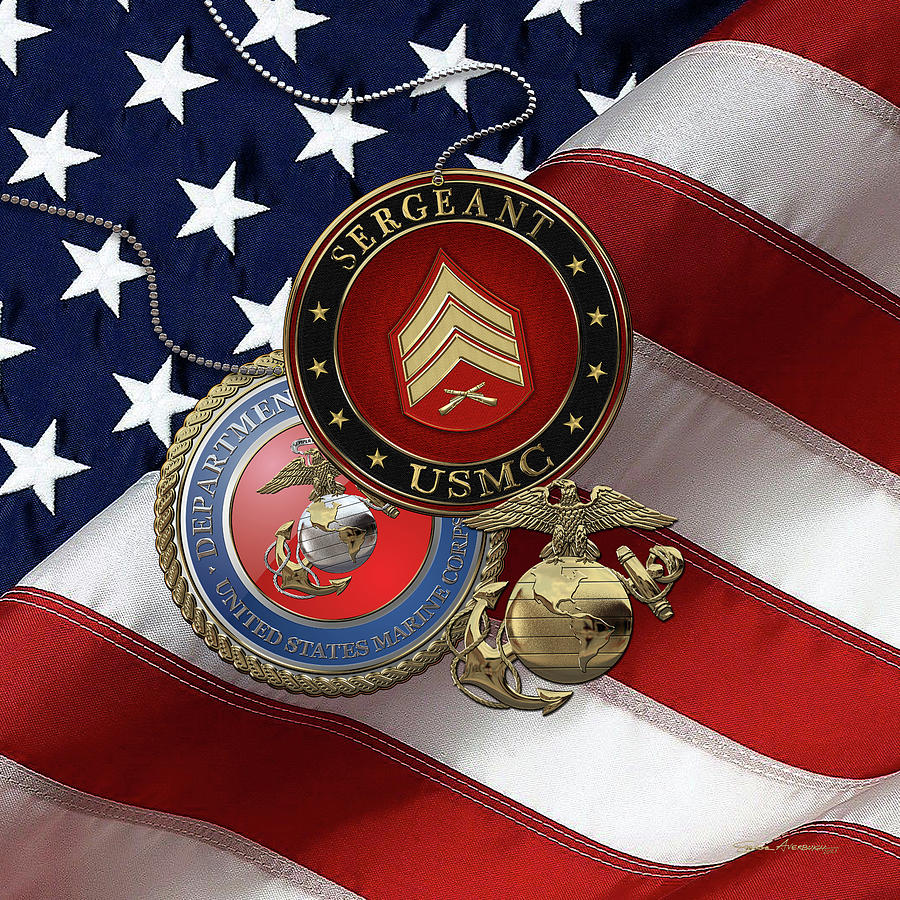 Introducing 'Military Insignia & Heraldry' collection by Serge Averbukh, showcasing new media paintings featuring military and government heraldry. Here you will find pieces featuring U.S. Marine Sergeant - USMC Sgt Rank Insignia with Seal and EGA over American Flag.
The United States Marine Corps has several ranks that carry the title of sergeant, the lowest of which is sergeant (E-5). Marine sergeants are the fifth enlisted rank in the U.S. Marine Corps, just above corporal and below staff sergeant. Once a Marine reaches sergeant, their promotion no longer derives from a composite or cutting score; instead, they receive a fitness report (i.e., a formal written evaluation, grading attributes from appearance and bearing to leadership and technical proficiency). Sergeants serve as squad leaders or platoon guide in an infantry platoon, while staff sergeants serve in the billet of "platoon sergeant" in rifle platoons and "section leader" in weapons platoons (i.e., machine guns, mortars, anti-tank/assault weapons) An experienced gunnery sergeant in the infantry is typically in charge of coordinating operations and individual training for a company-sized group of Marines (approximately 180 personnel). Infantry gunnery sergeants usually serve as platoon sergeant for a heavy weapons platoon before moving up to the Company Gunnery Sergeant billet. The US Marine sergeant is often referred to as the backbone of the Marine Corps.

There are no comments for U.S. Marine Sergeant - USMC Sgt Rank Insignia with Seal and EGA over American Flag.   Click here to post the first comment.