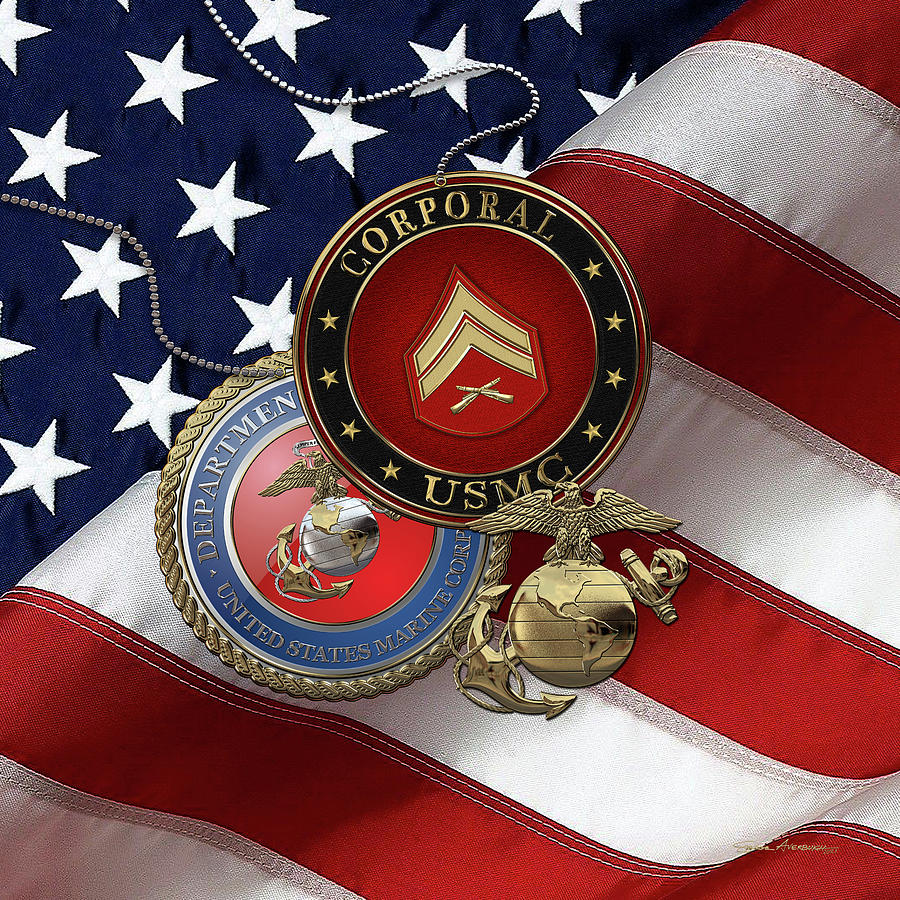 Introducing 'Military Insignia & Heraldry' collection by Serge Averbukh, showcasing new media paintings featuring military and government heraldry. Here you will find pieces featuring U.S. Marines Corporal Rank Insignia over American Flag.
Corporal is the fourth enlisted rank in the U.S. Marine Corps, ranking immediately above Lance Corporal and immediately below Sergeant. The Marine Corps, unlike the Army, has no other rank at the pay grade of E-4. Corporal is the lowest grade of non-commissioned officer in the U.S. Marine Corps, though promotion to Corporal traditionally confers a significant jump in authority and responsibility compared to promotion from Private through Lance Corporal. Marine infantry Corporals generally serve as "fire-team leaders," leading a 4-man team or weapons crew of similar size (e.g., assault weapons squad, medium machine gun team, or LWCMS mortar squad).
In practice, however, the billet of fire team leader is generally held by a lance Corporal, while Corporals serve in the squad leader billet that would normally be held by a Sergeant (E-5) in infantry units. In support units, Corporals generally serve in "journeyman" level roles in which they direct the activities of junior Marines and provide technical supervision, on a very limited scope, under the direct supervision of a Sergeant or SNCO. Due to its emphasis on small-unit tactics, its infantry-centric ethos, and its tradition of empowering junior NCO's to exercise first-level leadership, the U.S. Marine Corps' Tables of Organization (TOs) usually place Corporals (as well as Sergeants and staff Sergeants) in billets where other services would normally have higher ranking NCO's in authority. Similarly, the term "Strategic Corporal" refers to the special responsibilities conferred upon a Marine Corporal over the other branches of the U.S. Armed Forces.
Until the mid-to-late 1980s, Corporals were the lowest USMC rank eligible for selection as a drill instructor for USMC recruit training.