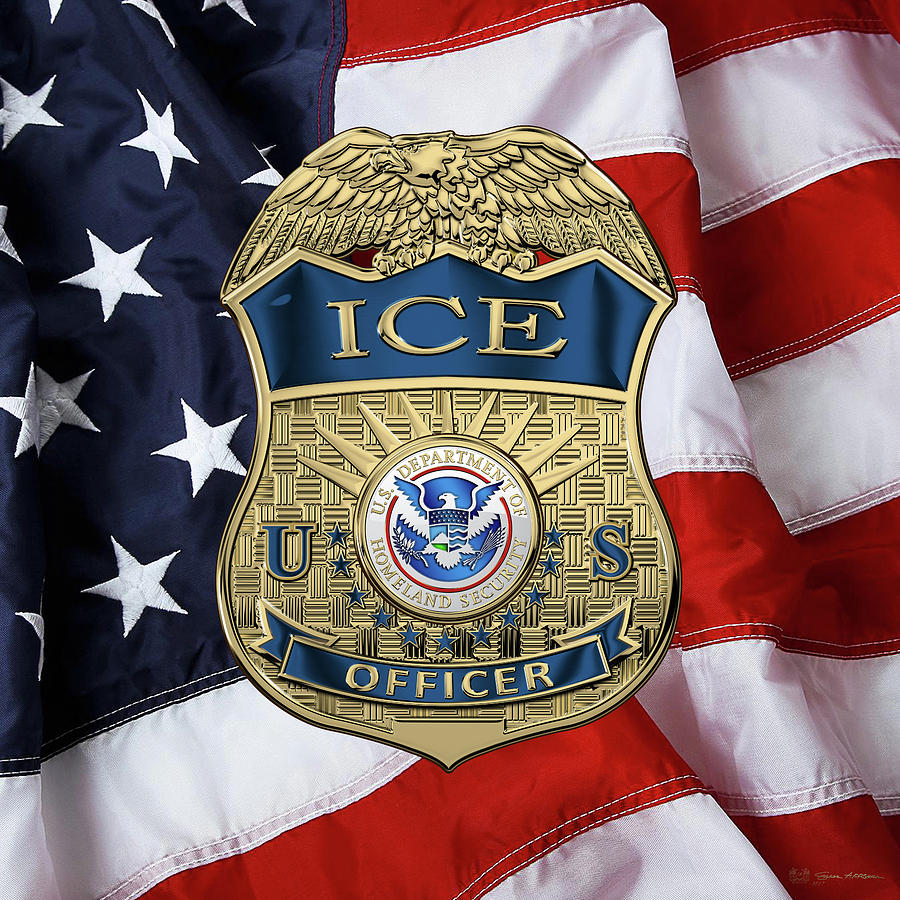 Introducing 'Law Enforcement Insignia & Heraldry' collection by Serge Averbukh, showcasing convergent media paintings featuring insignia and heraldry of various law enforcement departments. Here you will find pieces featuring U.S. Immigration and Customs Enforcement: ICE Officer Badge over American Flag.
U.S. Immigration and Customs Enforcement (or ICE) is a U.S. federal government law enforcement agency under the jurisdiction of the Department of Homeland Security (DHS). ICE has two primary components: Homeland Security Investigations (HSI) and Enforcement and Removal Operations (ERO). Headquartered in Washington, D.C., ICE is charged with the investigation and enforcement of over 400 federal statutes within the United States, and maintains attachés at major U.S. embassies overseas.
ICE is led by a director who is appointed at the sub-Cabinet level by the President, confirmed by the Senate, and reports directly to the Secretary of Homeland Security. Until July 2010 the title had been Assistant Secretary. ICE is the second-largest criminal investigative agency in the U.S. government after the FBI. U.S. Immigration and Customs Enforcement is responsible for identifying and eliminating border, economic, transportation, and infrastructure security vulnerabilities. There is an estimate of about more than 20,000 ICE employees in approximately over 400 offices within the United States including 46 other countries.
The organization is composed of two law enforcement directorates and several support divisions each headed by a director who reports to an Executive Associate Director. The divisions of ICE provide investigation, interdiction and security services to the public and other law enforcement partners in the federal and local sectors.

There are no comments for U. S. Immigration and Customs Enforcement - I C E Officer Badge over American Flag.   Click here to post the first comment.