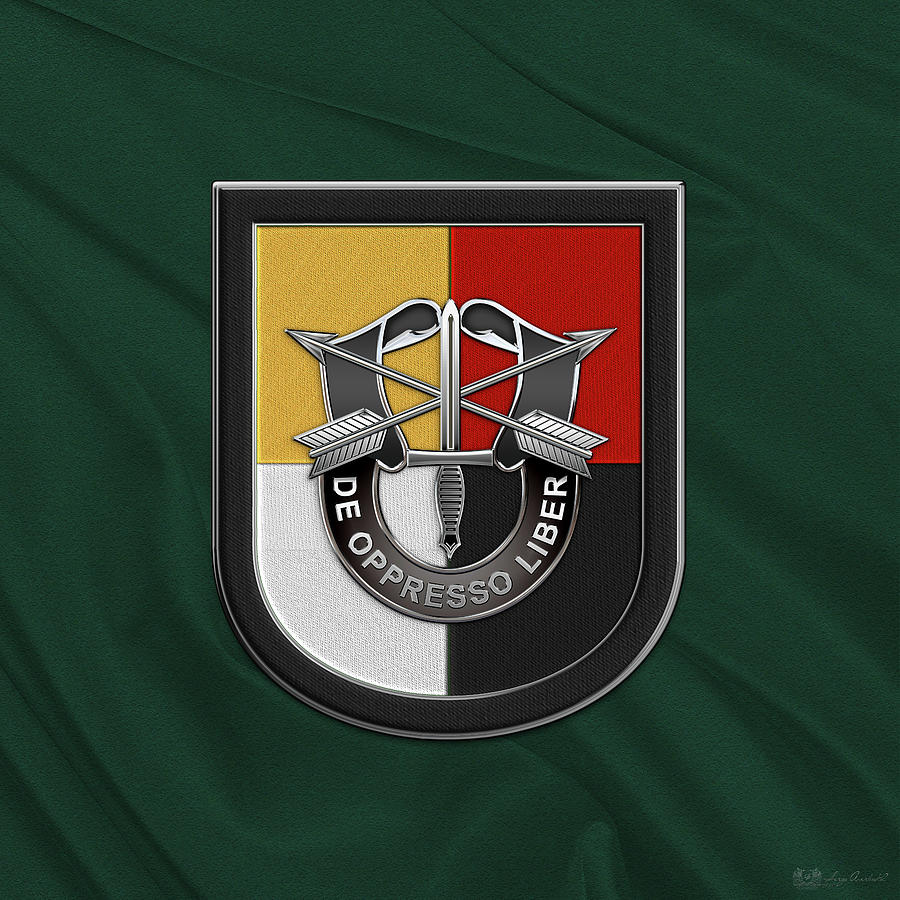 Introducing 'Military Insignia & Heraldry' collection by Serge Averbukh, showcasing convergent media paintings featuring military and government heraldry. Here you will find pieces featuring U.S. Army 3rd Special Forces Group - 3 SFG Beret Flash over American Flag.
The 3rd Special Forces Group (Airborne) � abbreviated 3rd SFG(A) and often called simply "3rd Group" � is a U.S. Army Special Forces (SF) unit active in the Vietnam Era (1963�69) and reactivated in 1990. It is subordinate of the United States Central Command (USCENTCOM) and the United States Special Operations Command Central (USSOCCENT or SOCCENT). Its area of operations (AO) is now Sub-Saharan Africa. 3rd Group was first activated on 5 December 1963 at Fort Bragg, North Carolina. The four colors of the quadrants of 3rd Group's distinctive unit flash derive from the flashes of the pre-existing SF units from which members were initially drawn. These colors are (clockwise from upper left): yellow (1st SFG (A)), red (7th SFG (A)), black (5th SFG (A)), and white (Special Forces Training Group (A)).
3rd Group had a Mideast and Africa orientation during the 1960s. It also supported 5th Group operations in Vietnam, losing the 403rd Army Security Agency Special Operations Detachment and the 19th PSYOP Company to 5th Group in 1966. With the "vietnamization" of the conflict in Southeast Asia, 3rd Group was deactivated in 1969 and members transferred back to various other SF groups. 3rd Group was reactivated in 1990 and, until the mid '90s, was given responsibility for the Caribbean as well as the western part of Africa. At the outbreak of the Persian Gulf War (August 1990), 3rd Group had only one functioning battalion (1st BN). This battalion deployed to Dhahran, Saudi Arabia, for three months, during which time it sent detachments forward into denied areas of Iraq and Kuwait for reconnaissance and sabotage missions. Ultimately, in late February 1991, it was given the mission of securing and occupying the U.S. Embassy in Kuwait City. The 2nd BN and 3rd BN of 3rd Group were reactivated in 1991 and 1992, respectively. 3rd Group took part in the restoration of democracy in Haiti in 1994. Since the mid 2000s 3rd Group's area of responsibility has primarily been Afghanistan, Pakistan, and Central Asia.

congratulations on your sale