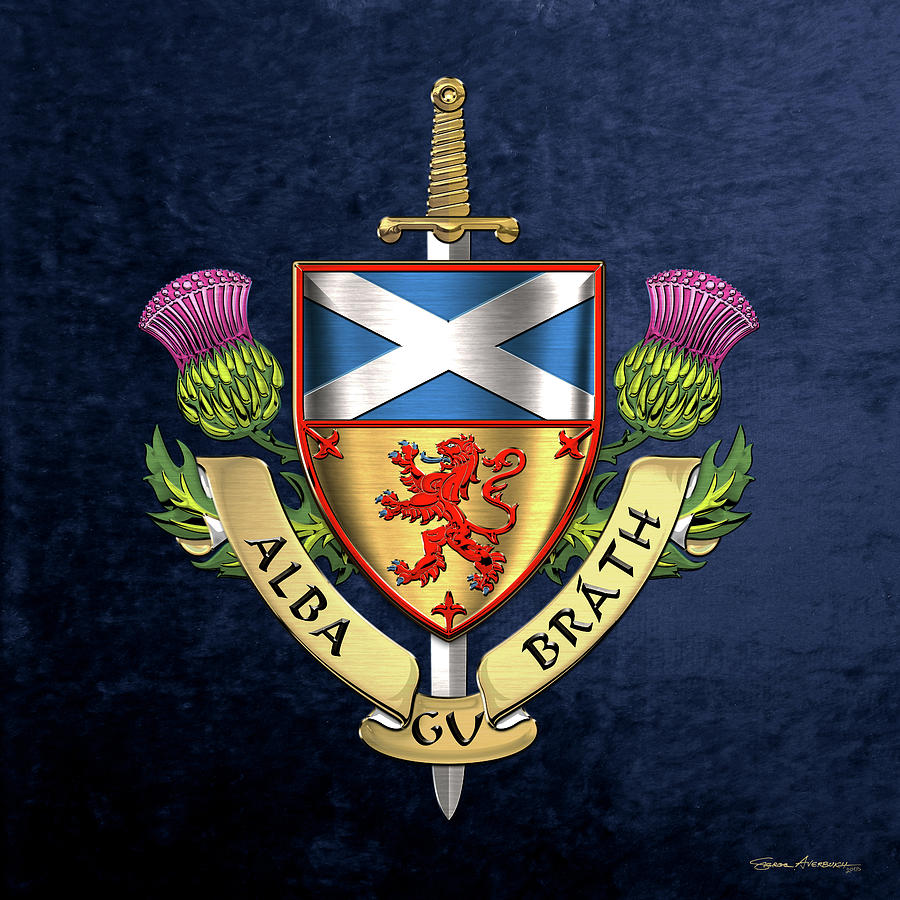 Introducing “World Heraldry” collection Serge Averbukh, showcasing stunning new media paintings of coats of arms, emblems and flags. Here you will find pieces featuring Scotland Forever - Alba Gu Brath - Symbols of Scotland over Blue Velvet
Scotland (Scottish Gaelic: Alba) is a country that is part of the United Kingdom and covers the northern third of the island of Great Britain. It shares a border with England to the south, and is otherwise surrounded by the Atlantic Ocean, with the North Sea to the east and the North Channel and Irish Sea to the south-west. In addition to the mainland, the country is made up of more than 790 islands, including the Northern Isles and the Hebrides.
The Kingdom of Scotland emerged as an independent sovereign state in the Early Middle Ages and continued to exist until 1707. By inheritance in 1603, James VI, King of Scots, became King of England and King of Ireland, thus forming a personal union of the three kingdoms. Scotland subsequently entered into a political union with the Kingdom of England on 1 May 1707 to create the new Kingdom of Great Britain. The union also created a new Parliament of Great Britain, which succeeded both the Parliament of Scotland and the Parliament of England. In 1801, Great Britain itself entered into a political union with the Kingdom of Ireland to create the United Kingdom of Great Britain and Ireland.
Within Scotland, the monarchy of the United Kingdom has continued to use a variety of styles, titles and other royal symbols of statehood specific to the pre-union Kingdom of Scotland. The legal system within Scotland has also remained separate from those of England and Wales and Northern Ireland; Scotland constitutes a distinct jurisdiction in both public and private law. The continued existence of legal, educational, religious and other institutions distinct from those in the remainder of the UK have all contributed to the continuation of Scottish culture and national identity since the 1707 union with England.
In 1997, a Scottish Parliament was re-established, in the form of a devolved unicameral legislature comprising 129 members, having authority over many areas of domestic policy. Scotland is represented in the United Kingdom Parliament by 59 MPs and in the European Parliament by 6 MEPs. Scotland is also a member of the British–Irish Council, and sends five members of the Scottish Parliament to the British–Irish Parliamentary Assembly.

Congratulations on your recent sale!

Congratulations on your recent sale

🥇Congrats on your Sale🥇