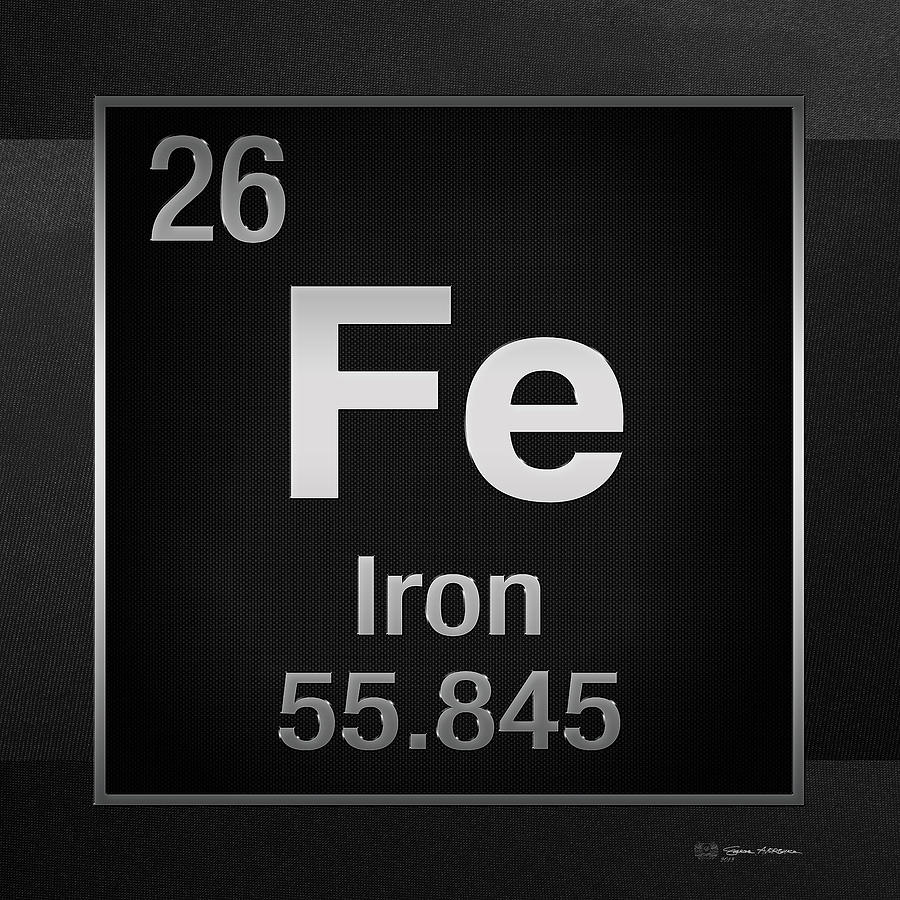 Introducing ‘The Elements’ collection by Serge Averbukh, showcasing artwork representing various elements of the periodic table. Here you will find pieces featuring Periodic Table of Elements - Iron (Fe) on Black Canvas.
Iron is a chemical element with symbol Fe (from Latin: ferrum) and atomic number 26. It is a metal in the first transition series. It is by mass the most common element on Earth, forming much of Earth's outer and inner core. It is the fourth most common element in the Earth's crust. Its abundance in rocky planets like Earth is due to its abundant production by fusion in high-mass stars, where it is the last element to be produced with release of energy before the violent collapse of a supernova, which scatters the iron into space.
Like the other group 8 elements, ruthenium and osmium, iron exists in a wide range of oxidation states, −2 to +7, although +2 and +3 are the most common. Elemental iron occurs in meteoroids and other low oxygen environments, but is reactive to oxygen and water. Fresh iron surfaces appear lustrous silvery-gray, but oxidize in normal air to give hydrated iron oxides, commonly known as rust. Unlike the metals that form passivating oxide layers, iron oxides occupy more volume than the metal and thus flake off, exposing fresh surfaces for corrosion.
Iron metal has been used since ancient times, although copper alloys, which have lower melting temperatures, were used even earlier in human history. Pure iron is relatively soft, but is unobtainable by smelting because it is significantly hardened and strengthened by impurities, in particular carbon, from the smelting process. A certain proportion of carbon (between 0.002% and 2.1%) produces steel, which may be up to 1000 times harder than pure iron. Crude iron metal is produced in blast furnaces, where ore is reduced by coke to pig iron, which has high carbon content. Further refinement with oxygen reduces the carbon content to the correct proportion to make steel. Steels and iron alloys formed with other metals (alloy steels) are by far the most common industrial metals because they have a great range of desirable properties and iron-bearing rock is abundant.
Iron plays an important role in biology, forming complexes with molecular oxygen in hemoglobin and myoglobin; these two compounds are common oxygen transport proteins in vertebrates. Iron is also the metal at the active site of many important redox enzymes dealing with cellular respiration and oxidation and reduction in plants and animals. A human male of average height has about 4 grams of iron in his body, a female about 3.5 grams. This iron is distributed throughout the body in hemoglobin, tissues, muscles, bone marrow, blood proteins, enzymes, ferritin, hemosiderin, and transport in plasma.