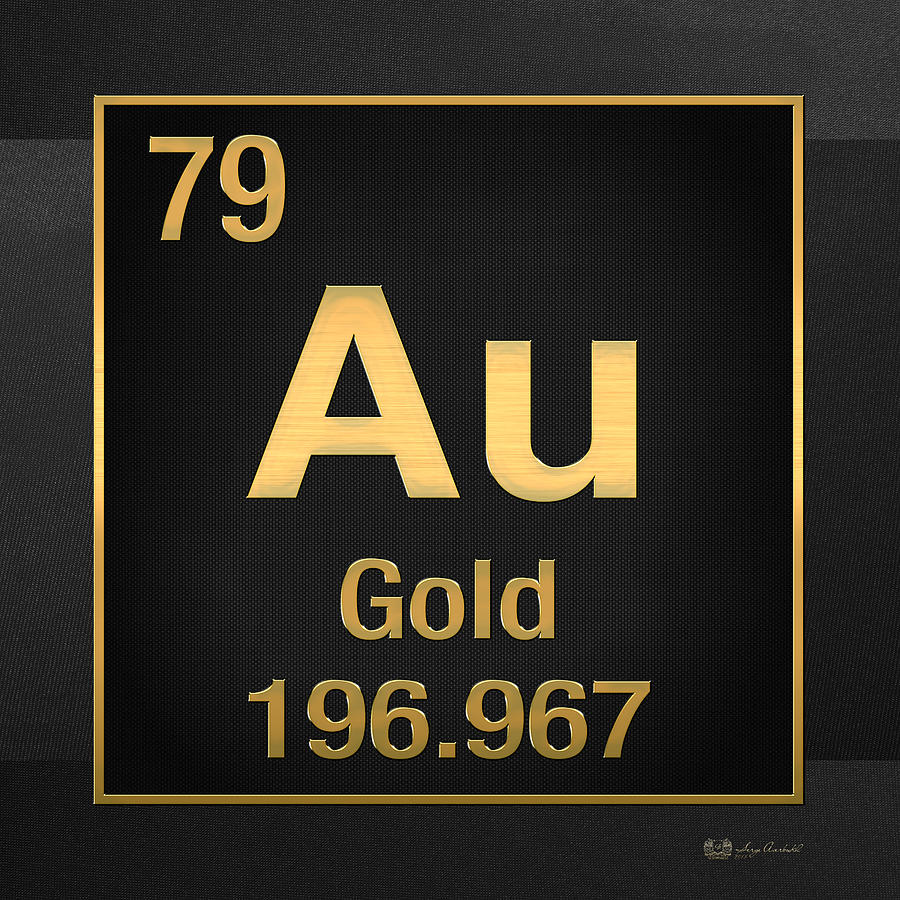 Introducing 'The Elements' collection by Serge Averbukh showcasing convergent media paintings depicting various elements of the periodic table. Here you will find framed and wrapped/stretched canvas fine art prints, featuring Periodic Table of Elements - Gold (Au) in Gold on Black Canvas.
The periodic table is a tabular arrangement of the chemical elements, organized on the basis of their atomic number (number of protons in the nucleus), electron configurations, and recurring chemical properties. Elements are presented in order of increasing atomic number, which is typically listed with the chemical symbol in each box. The standard form of the table consists of a grid of elements laid out in 18 columns and 7 rows, with a double row of elements below that.
Gold is a chemical element with symbol Au (from Latin: aurum) and atomic number 79. In its purest form, it is a bright, slightly reddish yellow, dense, soft, malleable and ductile metal. It is one of the least reactive chemical elements, and is solid under standard conditions. The metal therefore occurs often in free elemental (native) form, as nuggets or grains, in rocks, in veins and in alluvial deposits. Gold's atomic number of 79 makes it one of the higher atomic number elements that occur naturally in the universe. It is thought to have been produced in supernova nucleosynthesis and to have been present in the dust from which the Solar System formed. Because the Earth was molten when it was just formed, almost all of the gold present in the early Earth probably sank into the planetary core. Therefore most of the gold that is present today in the Earth's crust and mantle is thought to have been delivered to Earth later, by asteroid impacts during the late heavy bombardment, about 4 billion years ago.

This metal has been a valuable and highly sought-after precious metal for coinage, jewelry, and other arts since long before the beginning of recorded history. In the past, a gold standard was often implemented as a monetary policy within and between nations, but gold coins ceased to be minted as a circulating currency in the 1930s, and the world gold standard was finally abandoned for a fiat currency system after 1976. The historical value of gold was rooted in its medium rarity, easy handling and minting, easy smelting, non-corrodability, distinct color, and non-reactivity to other elements.
A total of 174,100 tonnes of gold have been mined in human history, according to GFMS as of 2012. This is roughly equivalent to 5.6 billion troy ounces or, in terms of volume, about 9020 m3, or a cube 21 m on a side. The world consumption of new gold produced is about 50% in jewelry, 40% in investments, and 10% in industry.

Art is unquestionably one of the purest and highest elements in human happiness. It trains the mind through the eye, and the eye through the mind. As the sun colours flowers, so does art colour life. ― John Lubbock CONGRATULATIONS ON SALE!

Congrats on your sale!!!!