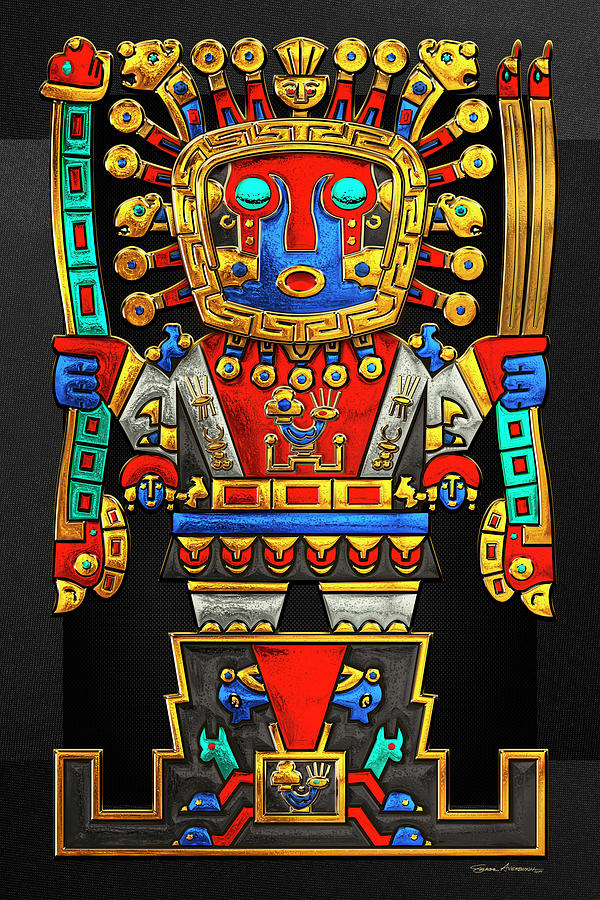 Introducing 'Pre-Columbian America' Collection by Serge Averbukh, showcasing treasures and artifacts created by various civilizations and cultures of Precontact Americas. Here you will find framed and wrapped canvas fine art prints, featuring Incan Gods - The Great Creator Viracocha on Black Canvas.
The Inca Empire ("The Four Regions"), also known as the Incan Empire and the Inka Empire, was the largest empire in pre-Columbian America. Its political and administrative structure is considered by most scholars to have been the most developed in the Americas before Columbus' arrival. The administrative, political and military center of the empire was located in Cusco, Peru. The Inca civilization arose from the Peruvian highlands sometime in the early 13th century. Its last stronghold was conquered by the Spanish in 1572.
From 1438 to 1533, the Incas incorporated a large portion of western South America, centered on the Andean Mountains, using conquest and peaceful assimilation, among other methods. At its largest, the empire joined Peru, southwest Ecuador, western and south central Bolivia, northwest Argentina, northern Chile and a small part of southwest Colombia into a state comparable to the historical empires of Eurasia. Its official language was Quechua. Many local forms of worship persisted in the empire, most of them concerning local sacred Huacas, but the Inca leadership encouraged the sun worship of Inti – their sun god – and imposed its sovereignty above other cults such as that of Pachamama. The Incas considered their king, the Sapa Inca, to be the "son of the sun.
The Inca Empire was unique in that it lacked many features associated with civilization in the Old World. The Incas lacked the use of wheeled vehicles. They lacked animals to ride and draft animals that could pull wagons and plows... They lacked the knowledge of iron and steel... Above all, they lacked a system of writing... Despite these supposed handicaps, the Incas were still able to construct one of the greatest imperial states in human history. Notable features of the Inca Empire include its monumental architecture, especially stonework, extensive road network reaching all corners of the empire, finely-woven textiles, use of knotted strings (quipu) for record keeping and communication, agricultural innovations in a difficult environment, and the organization and management fostered or imposed on its people and their labor. The Inca empire functioned largely without money and without markets. Instead, exchange of goods and services was based on reciprocity between individuals and among individuals, groups, and Inca rulers. "Taxes" consisted of a labour obligation of a person to the Empire. The Inca rulers (who theoretically owned all the means of production) reciprocated by granting access to land and goods and providing food and drink in celebratory feasts for their subjects.
Viracocha is the great creator deity in the pre-Inca and Inca mythology in the Andes region of South America. Full name and some spelling alternatives are Wiracocha, Apu Qun Tiqsi Wiraqutra, and Con-Tici (also spelled Kon-Tiki, the source of the name of Thor Heyerdahl's raft). Viracocha was one of the most important deities in the Inca pantheon and seen as the creator of all things, or the substance from which all things are created, and intimately associated with the sea. Viracocha created the universe, sun, moon, and stars, time (by commanding the sun to move over the sky) and civilization itself. Viracocha was worshipped as god of the sun and of storms. He was represented as wearing the sun for a crown, with thunderbolts in his hands, and tears descending from his eyes as rain.