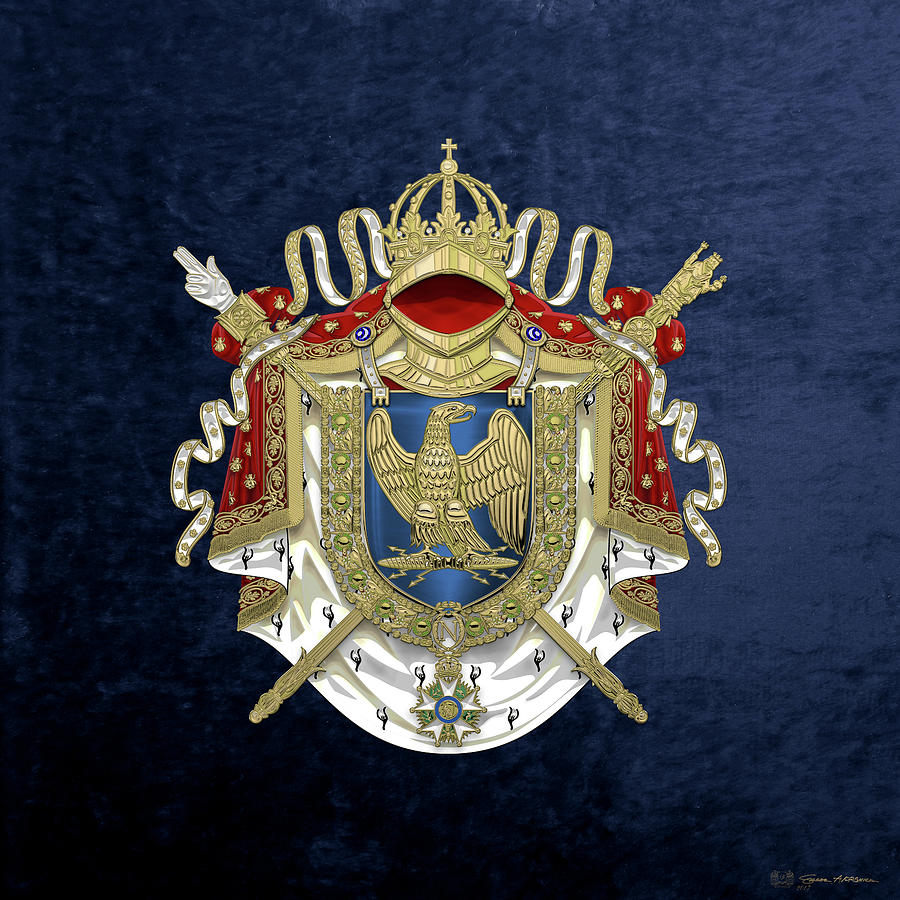 Introducing 'Napoleon Bonaparte' collection by Serge Averbukh, showcasing new media paintings associated with one of the most celebrated and controversial leaders in human history. Here you will find pieces featuring Greater Coat of Arms of the First French Empire over Blue Velvet.
Napoléon Bonaparte (15 August 1769 – 5 May 1821) was a French military and political leader who rose to prominence during the French Revolution and led several successful campaigns during the French Revolutionary Wars. As Napoleon I, he was Emperor of the French from 1804 until 1814, and again briefly in 1815 (during the Hundred Days). Napoleon dominated European and global affairs for more than a decade while leading France against a series of coalitions in the Napoleonic Wars. He won most of these wars and the vast majority of his battles, building a large empire that ruled over continental Europe before its final collapse in 1815. One of the greatest commanders in history, his wars and campaigns are studied at military schools worldwide. Napoleon's political and cultural legacy has endured as one of the most celebrated and controversial leaders in human history.
The First French Empire (French: Empire Français), Note 1 was the empire of Napoleon Bonaparte of France and the dominant power in much of continental Europe at the beginning of the 19th century. Although France had already established an overseas colonial empire beginning in the 17th century, historians refer to Napoleon's regime as the First Empire because he was the first ruler of France since the days of the Franks to take an imperial title.
On 18 May 1804, Napoleon was granted the title Emperor of the French (L'Empereur des Français) by the French Sénat and was crowned on 2 December 1804, ending the period of the French Consulate and of the French First Republic. The French Empire won early military victories in the War of the Third Coalition against Austria, Prussia, Russia, Portugal, and allied nations, notably at the Battle of Austerlitz in 1805 and, during the War of the Fourth Coalition, at the Battle of Friedland in 1807.
A series of wars, known collectively as the Napoleonic Wars, extended French influence over much of Western Europe and into Poland. At its height in 1812, the French Empire had 130 departments, ruled over 70 million subjects, maintained an extensive military presence in Germany, Italy, Spain, and the Duchy of Warsaw, and could count Prussia and Austria as nominal allies. Early French victories exported many ideological features of the French Revolution throughout Europe: the introduction of the Napoleonic Code throughout the continent increased legal equality, established jury systems and legalized divorce, and seigneurial dues and seigneurial justice were abolished, as were aristocratic privileges in all places with the exception of Poland.

congrats for the sale!