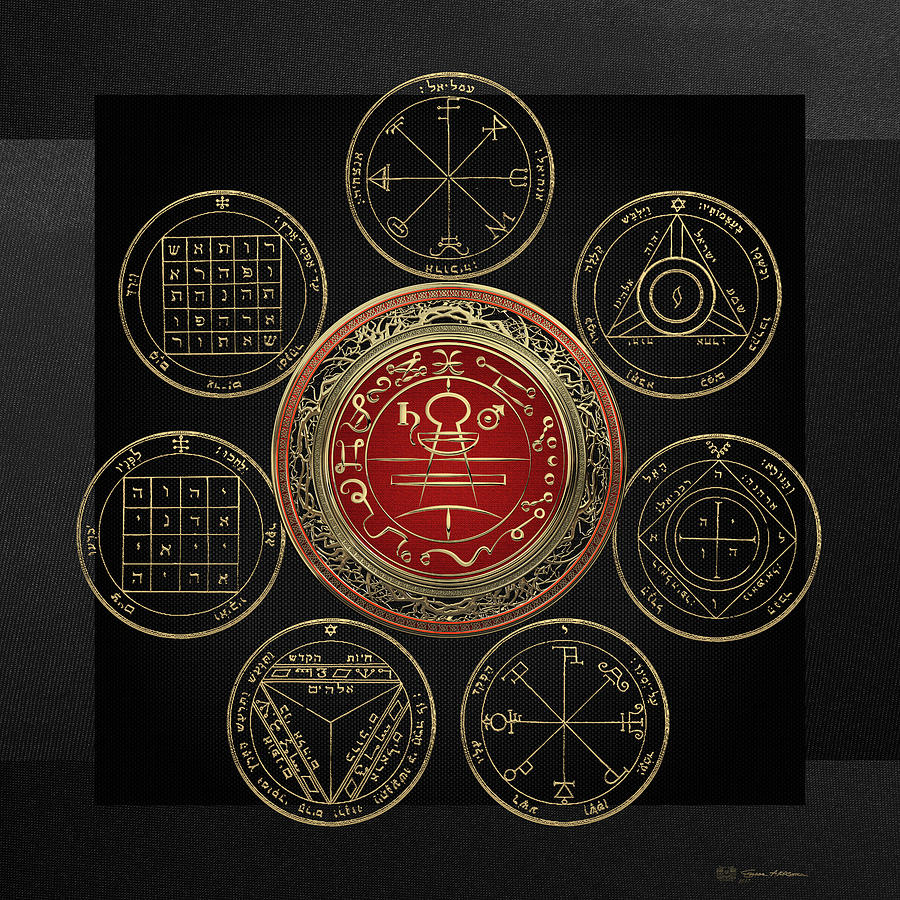 Introducing 'Sacred Symbols' collection by Serge Averbukh, showcasing stunning new media paintings of various sacred artifacts and symbology. Here you will find framed and wrapped canvas fine art prints, featuring Gold Seal of Solomon over Seven Pentacles of Saturn on Black Canvas
The Seal of Solomon (or Ring of Solomon) is the signet ring attributed to King Solomon in medieval Jewish tradition, and in Islamic and Western occultism. It was often depicted in either a pentagram or hexagram shape; the latter also known as the Star of David in Jewish tradition. This ring variously gave Solomon the power to command demons, jinn (genie), or to speak with animals. Due to the proverbial wisdom of Solomon, his signet ring, or its supposed design, came to be seen as an amulet or talisman, or a symbol or character in medieval and Renaissance-era magic, occultism and alchemy.
The legend of the Seal of Solomon was developed primarily by medieval Arabic writers, who related that the ring was engraved by God and was given to the king directly from heaven. The ring was made from brass and iron, and the two parts were used to seal written commands to good and evil spirits, respectively. In one tale, a demon, either Asmodeus, or Sakhr, obtained possession of the ring and ruled in Solomon's stead for forty days. In a variant of the tale of the ring of Polycrates from Herodotus, the demon eventually threw the ring into the sea, where it was swallowed by a fish, caught by a fisherman, and served to Solomon.
The Lesser Key of Solomon, also known as Clavicula Salomonis Regis or Lemegeton, is an anonymous grimoire (or spell book) on demonology. Its one-hundred-forty-four spells were compiled in the mid-17th century, mostly from materials some centuries older. It is divided into five books—the Ars Goetia, Ars Theurgia-Goetia, Ars Paulina, Ars Almadel, and Ars Notoria.