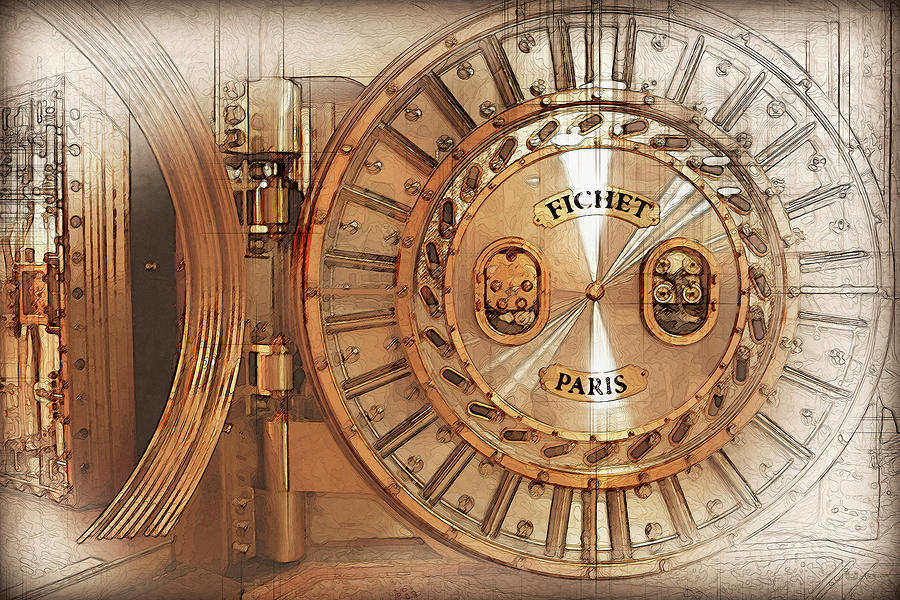 Here you will find pieces featuring a Fichet Bank Vault Door & Lock.
A bank vault (or strongroom) is a secure space where money, valuables, records, and documents can be stored. It is intended to protect their contents from theft, unauthorized use, fire, natural disasters, and other threats, just like a safe. But unlike safes, vaults are an integral part of the building within which they are built, using armored walls and a tightly fashioned door closed with a complex lock.
Historically, strongrooms were built in the basement of a bank where the ceilings were vaulted, hence the name. Modern bank vaults typically contain many safe deposit boxes, as well as places for teller cash drawers, and other valuable assets of the bank or its customers. They are also common in other buildings where valuables are kept such as post offices, grand hotels, rare book libraries and certain government ministries.
Vault technology developed in a type of arms race with bank robbers. As burglars came up with new ways to break into vaults, vault makers found innovative ways to foil them. Modern vaults may be armed with a wide array of alarms and anti-theft devices. Some nineteenth and early twentieth century vaults were built so well that today they are almost impossible to destroy. These older vaults were typically made with steel-reinforced concrete. The walls were usually at least 1 ft (0.3 m) thick, and the door itself was typically 3.5 ft (1.1 m) thick. Total weight ran into the hundreds of tons. Today vaults are made with thinner, lighter materials that, while still secure, are easier to dismantle than their earlier counterparts. Born 7 February 1799 in Etrepilly, France, Alexandre Fichet opened a locksmiths in Paris in 1825 at the age of 26. He registered his first patent in 1829 for a safety lock and further patents followed in 1834 and 1836. Shortly after, Fichet set up a small workshop in Paris and began expanding into the manufacture of safes. In 1840, he made his first modern fire safe made entirely of steel and using his now renowned, Fichet lock and key. As production outgrew the workshop, Fichet built a factory in Monceau in Paris, followed by a second and third in Lyon and Marseille.

Fichet died in 1862 at the age of 63 and the business changed hands frequently from Loius and Apolline Bonnet, to Monsieur Charlier, manager of the workshops, and then to businessmen, Monsieur Guenot and Monsieur Pinot. Nevertheless, the business continued to grow. In 1879, the Fichet company built its first bank vault room with rentable safe deposit lockers. New factories were opened one after the other, most notably in Oust-Marest in the Somme region where security locks were manufactured. This factory was supported by the nearby 'Fichet Village' and by a factory in Creil which made bank safes. On the eve of World War I, the general partnership that was Fichet became a limited partnership, and came under the management of Jacques Bournisien and Marcel Beau. A factory was set up in Sens in 1917 and two years later branches were opened all around the world, including Italy, Argentina, Spain, Belgium, Romania and Brazil. The company was able to expand its clients' security and installed its first industrial alarm and surveillance network in 1926. The day before World War II, Bournisien died, leaving Beau to run the company. He was aided for a time by Monsieur Nadaud, the husband of Alexandre Fichet's great-great-granddaughter.