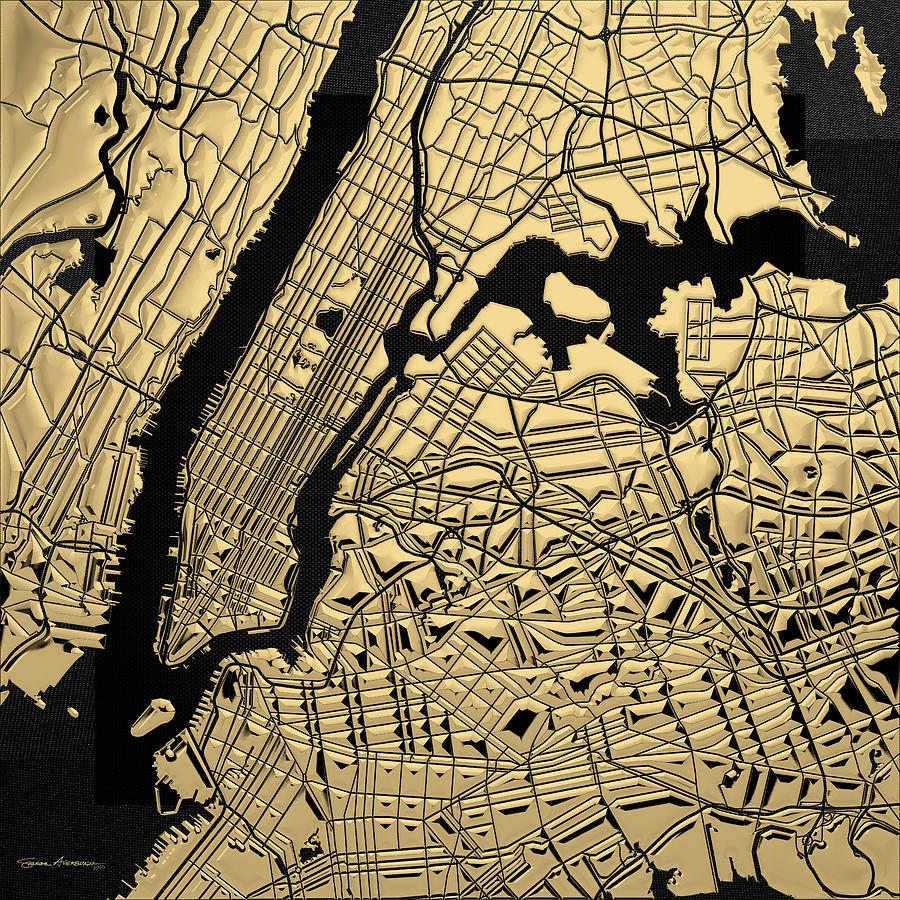 Introducing ' Cities of Gold ' series, a part of the 'Cityscapes' collection by Serge Averbukh, showcasing new media paintings celebrating The Big Apple. Here you will find pieces featuring Golden City Map New York on Black.
The City of New York, often called New York City (NYC) or simply New York, is the most populous city in the United States. With an estimated 2017 population of 8,622,698 distributed over a land area of about 302.6 square miles (784 km2), New York City is also the most densely populated major city in the United States. Located at the southern tip of the state of New York, the city is the center of the New York metropolitan area, the largest metropolitan area in the world by urban landmass and one of the world's most populous megacities, with an estimated 20,320,876 people in its 2017 Metropolitan Statistical Area and 23,876,155 residents in its Combined Statistical Area. A global power city, New York City has been described as the cultural, financial, and media capital of the world, and exerts a significant impact upon commerce, entertainment, research, technology, education, politics, tourism, and sports. The city's fast pace defines the term New York minute. Home to the headquarters of the United Nations, New York is an important center for international diplomacy.
Situated on one of the world's largest natural harbors, New York City consists of five boroughs, each of which is a separate county of the State of New York. The five boroughs – Brooklyn, Queens, Manhattan, The Bronx, and Staten Island – were consolidated into a single city in 1898.
New York City traces its origins to a trading post founded by colonists from the Dutch Republic in 1624 on Lower Manhattan; the post was named New Amsterdam in 1626. The city and its surroundings came under English control in 1664 and were renamed New York after King Charles II of England granted the lands to his brother, the Duke of York. New York served as the capital of the United States from 1785 until 1790. It has been the country's largest city since 1790.

Wonderful! Congratulations on both your sale and talent!

Congratulations on your recent sale!

Congratulations on your successful sale!