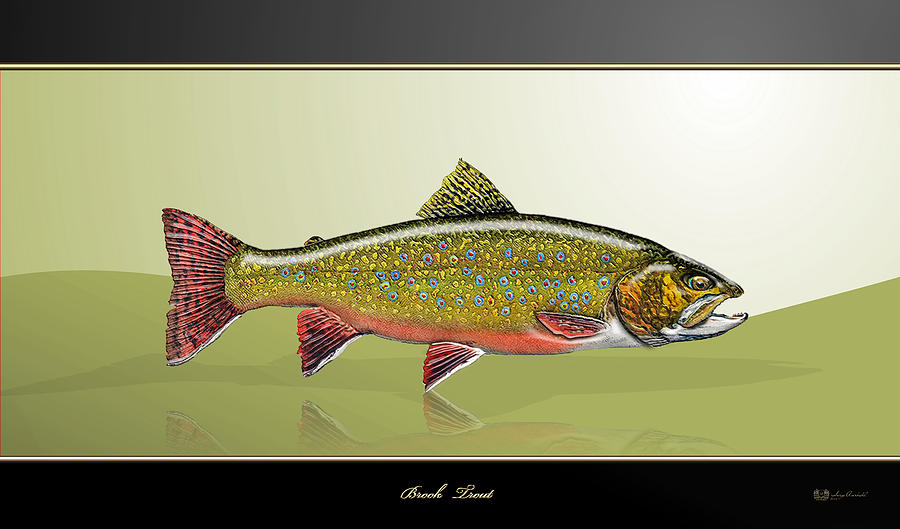 Introducing 'Fishing Corner' collection by Serge Averbukh, showcasing convergent media paintings depicting wide variety of most popular game fish, tackle, lures and other accessories celebrating this exciting pastime. The idea behind the unique style of my paintings was to make it look almost like a real trophy hanging on your wall. I would like to use this opportunity to acknowledge incredibly talented artist Flick Ford, who specializes in art paintings of fish. His amazing artwork quite often served as reference materials for this series.
Here you will find a selection of fine art prints, framed as well as stretched/wrapped canvas, featuring Brook Trout...
The brook trout (Salvelinus fontinalis), sometimes called the eastern brook trout, is a species of fish in the salmon family of order Salmoniformes. It is native to Eastern North America in the United States and Canada. In many parts of its range, it is known as the speckled trout or squaretail. A potamodromous population in Lake Superior is known as coaster trout or, simply, as coasters. Though commonly called a trout, the brook trout is actually a char (Salvelinus) which in North America, includes the lake trout, bull trout, Dolly Varden and the arctic char. The brook trout is the state fish for eight states: Michigan, New Hampshire, New Jersey, New York, Pennsylvania, Vermont, Virginia and West Virginia. Fisheries biologist Robert Behnke describes three forms of the brook trout. A large lake form evolved in the larger lakes in the northern reaches of it range and is generally piscivorous as adults. A sea-run form that migrates into salt-water for short periods of time to feed evolved along the Atlantic coastline. Finally, Behnke describes a smaller generalist form that evolved in the small lakes, ponds, rivers and streams throughout most of the original native range. This generalist form rarely attains sizes larger than 12 inches (30 cm) or lives for more than 3 years. All three forms have the same general appearance. The brook trout has a dark green to brown color, with a distinctive marbled pattern (called vermiculations) of lighter shades across the flanks and back and extending at least to the dorsal fin, and often to the tail. A distinctive sprinkling of red dots, surrounded by blue haloes, occur along the flanks. The belly and lower fins are reddish in color, the latter with white leading edges. Often, the belly, particularly of the males, becomes very red or orange when the fish are spawning. The species reaches a maximum recorded length of 86 cm (33 in) and a maximum recorded weight of 6.6 kg (14.5 lb). It can reach at least seven years of age, with reports of 15 year old specimens observed in California habitats to which the species has been introduced. Typical lengths vary from 25 to 65 cm (10 to 26 in), and weights vary from 0.3 to 3.0 kg (0.7 to 7.0 lb). The brook trout is a popular game fish with anglers, particularly fly fishermen. Today, many anglers practice catch-and-release tactics to preserve remaining populations