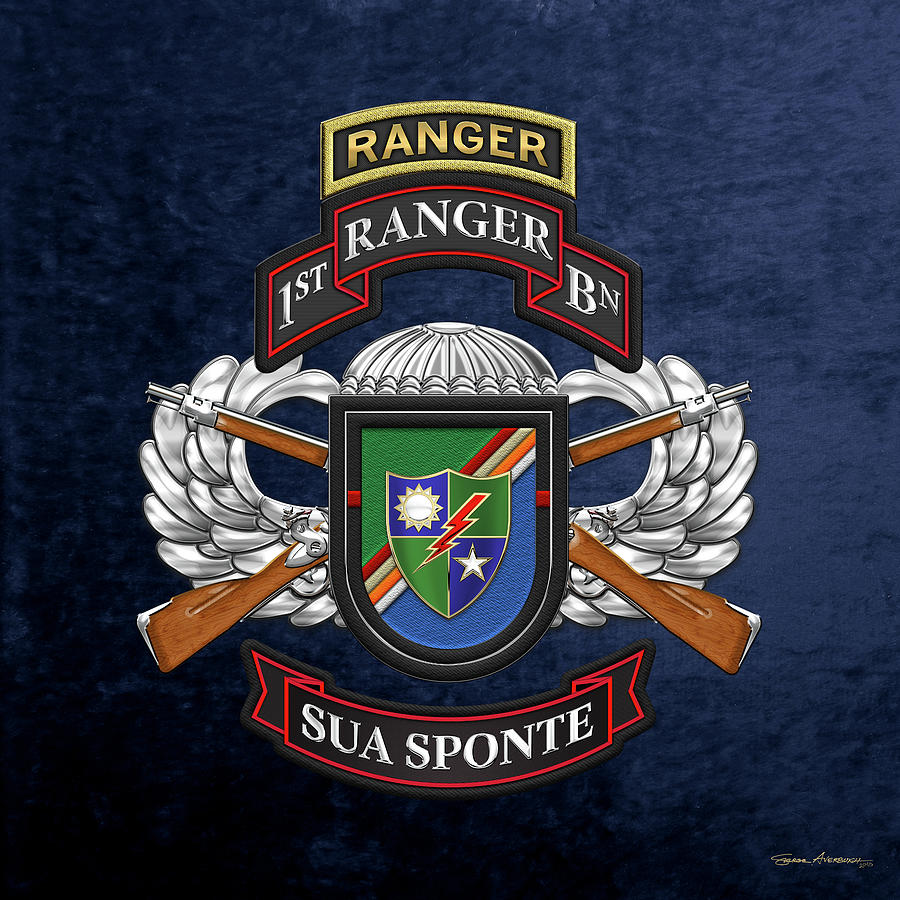 Introducing 'Military Insignia & Heraldry' collection by Serge Averbukh, showcasing stunning new media paintings featuring a wide range of military and government heraldry. Here you will find pieces featuring 1st Ranger Battalion - Army Rangers Special Edition over Blue Velvet.
The 75th Ranger Regiment, also known as Army Rangers, is a light infantry airborne special operations force that is part of the United States Army Special Operations Command. The Regiment is headquartered at Fort Benning, Georgia and is composed of one special troops battalion and three Ranger battalions. The primary mission of the Regiment is to conduct direct action raids in hostile or sensitive environments worldwide, often killing or capturing high value targets.
The 75th Ranger Regiment is the U.S. Army's premier light infantry unit, with specialized skills that enable the Regiment to perform a variety of missions. Besides direct action raids, these include: Airfield seizure, special reconnaissance, personnel recovery, clandestine insertion, and site exploitation. The Regiment can deploy one Ranger battalion within 18 hours of alert notification.
The 1st Ranger Battalion, currently based at Hunter Army Airfield in Savannah, Georgia, United States, is the first of three ranger battalions belonging to the United States Army's 75th Ranger Regiment.
It was originally formed shortly after the United States' entry into World War II and was modeled after the British Commandos during the war. Members from the unit were the first American soldiers to see combat in the European theater when they participated in the failed raid on Dieppe in France in 1942, during which three Rangers were killed and several more were captured. Later, the 1st Ranger Battalion was sent to North Africa where they participated in the landings in Algeria and the fighting in Tunisia in 1943. Also in 1943 the unit provided cadre for two more Ranger battalions created between the campaigns in Sicily and Italy. After World War II, the 1st Ranger Battalion has gone through a number of changes of name and composition as it has been activated, deactivated and reorganized on a number of occasions. However, the unit has lived on in one form or another since then, serving in the Korean and Vietnam Wars before being consolidated into the 75th Ranger Regiment of which it is a part today. Recent deployments have included operations in both Iraq and Afghanistan as part of the wider global war on terrorism.